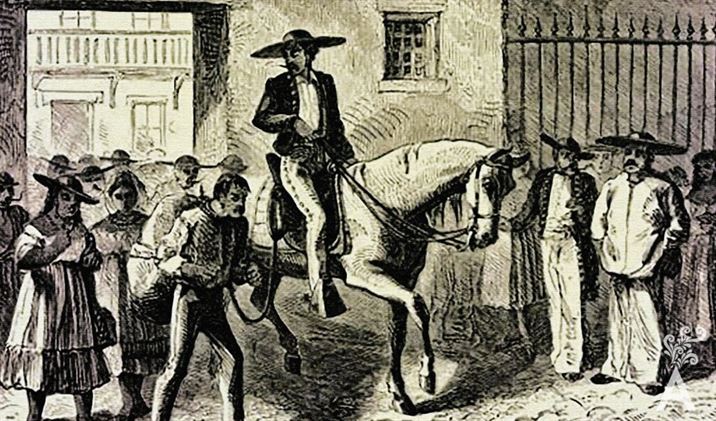 Located on one of the main avenues in La Paz, the chapel of “La Animita,” according to legend, grants miracles to those who visit. The courageous story of a child lies behind this tale.

Jose Lino Martinez Manriquez was born in the village of San Antonio on September 3, 1855.

It was in that year that his father Jose Miguel was actively involved in the fight against the pirate Juan Napoleon Zerman who had surrounded the city of La Paz. In support of General Manuel Marquez de Leon and in the face of hostile fire, he took the crew of the pirate ships “Archibald Grace” and “Rebecca Adams” as prisoners. He led them to the port of Mazatlan for their transfer to Mexico City. The participation of Sergeant Manriquez Martinez in this and other actions resulted in him being named head of the San Antonio Real Mounted Police.

The year 1861 was underway when Sergeant Manriquez was sent to keep order at the wedding of the trader Miguel Gonzalez Rodriguez and Ms. Soledad Rufo Santacruz. The groom had invited the Manriquez Martinez family to attend the wedding.

As a result, the child Jose Lino attracted the attention of Professor Victor Pineda de la Cruz and his girlfriend, the teacher Refugio Contreras. As luck would have it, the boy was admitted months later as a regular student to the Parochial Lyceum and came under the instruction of Refugio’s parents. Refugio became the music teacher for the new student.

The family decided to move permanently to La Paz to be with Don Jose Miguel who had separated from military service and worked as the chief of guards at an amusement park.

In mid-1866, at a time when everything seemed calm, Governor Antonio Pedrin was overthrown by General Pedro Maria Navarrete who, far from ingratiating himself with the people, committed several outrages and became known in regional history as one of the most bloodthirsty rulers.

General Navarrete, a representative of the French government, had taken several liberal patriots prisoner and confined them to military dungeons. Among the detainees sentenced to death was Sgt. Manriquez. On November 11, 1866, he was confined to a narrow and unhealthy cell under the care of Cape Crispin Sandez, chief guard of the penitentiary and one of the most abject followers of the imperialist Navarrete.

Little Jose Lino, when bringing food to his father, witnessed the unprecedented cruelty of Sandez when he ordered the prisoner to be taken out of his cell and beaten until bleeding and unconscious from pain in the presence of the child. Jose Lino faced Cape Sandez and begged mercy for his father. In response, the soldier replied with a rough voice full of cruelty:

“Why do you want mercy for your father? He is a evil-doer villain and this afternoon at four o’clock he will be shot at the wall of the Cienegas.”

Stricken by grief, Jose Lino de Jesus watched as the badly wounded body of his father was taken back to the cell. Jose Lino returned to the house to tell his mother and made a decision that would add him in the pages of history.

He went to the appointed place for the execution and confronted Cape Sandez with an unusual proposal.

“Will you give me your word as a man and a soldier to respect the life of my father if I offer to be shot instead?”

The proposal was answered by the irate Navarrete with a slight nod. Without another word, little Jose Lino, just 11 years old, was lassoed with a rope and dragged through the bushes and cholla to the Cienega.

After the despicable murder, Don Jose Miguel was forced to dig the grave of the heroic child. The exact location of the grave is just a few meters from where popular demand resulted in the building of a modest chapel to perpetuate the sublime act of filial love.

Since then, many pilgrims come every day of the week to lay wreaths, light candles or place figures of gold and silver in payment for their fervent prayers. The faithful have been awarded with countless miracles. It has become a popular tradition to call the chapel “La Animita del Camino Real.”