The woman who just wanted to be heard 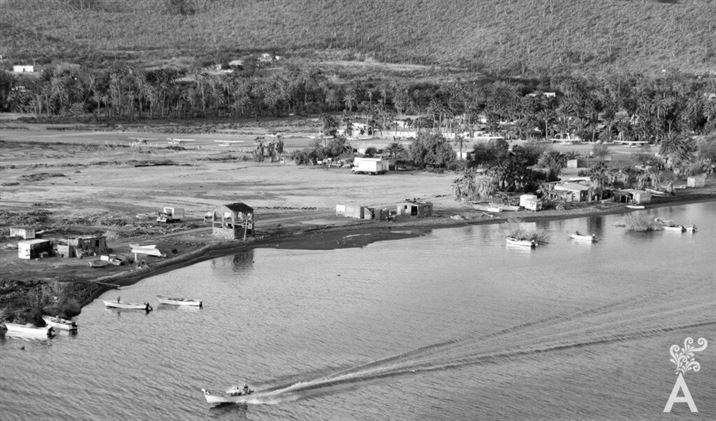 Absorbed in the different beers at the bar because there was nothing more interesting to observe, I heard a deep and serious voice in my right ear and it ordered a drink. It was the voice that would seduce the man who would later become her husband.

“You know, you do not have to act with me, Steve… You do not have to say anything and do not have to do anything. Nothing at all… Or just whistle… You know how to whistle, don’t you, Steve?… Just put your lips together and… blow.” I violently turned my head with eyes and mouth wide open. She smiled, amused by the effect of her words and asked me to come closer. Sit boy, she ordered. Drink with me. It was all I really understood of the monologue the woman delivered that night to my ears only.

The bar of this hotel in Mulege* was immersed in one of those boring mid-week evenings when solitary cats come out to snoop and see what happens. The bartender, a waiter, the voice and I were the only ghosts in that place on one of the lost beaches bordering the Gulf of the ancient Mexican California.

Faulkner was right when he said a real woman should have a heart like a revolving door. I entered her orbit dizzied by the low reaches of a voice that sucked me in and the golden hues of a look that this time was not defiant or proud but playful, and yet still set my defenseless soul afire.

A half-century ago, she must have trusted me enough to share some secrets of the men who loved her off the screen. There was old Bogart, who attracted her with his killer badman style. He was a handsome subject, but ended up dying cirrhotic and cancerous. She must have told me about the dictatorial dirty tricks she suffered while shooting with Howard Hawks, or about the quiet evenings with Jason Robards, but I believe she said little about the dull season she spent with the gangster Sinatra… I didn’t keep record of the details then. I only remember the severe modulations of the voice. When I read her obituary, it evoked a memory of the next day when I grandly wote on the first page of a school notebook: “Dear Diary: I spent the night last night with Lauren Bacall. Sorry. I spent the night last night listening to… “

Who did I think I was then? -Just a kid -To disrespect a beautiful lady who, during that night of drinks, only wanted to talk.

Lauren Bacall began her career as a model before working in the movie industry. She participated in 40 films, including the film noir classics To Have and Have Not (1944), The Big Sleep (1946), Dark Passage (1946) and Cape Largo (1948), as well as other films of various genres such as how to Marry a Millionaire (1953), Designing Woman (1957), Harper, private investigator (1966), Murder on the Orient Express (1974) and the Mirror Has Two Faces (1996). Her performances earned her many awards, including a Screen Actors Guild Award, a Golden Globe Award and two Tonys. For her long career, she received an honorary Oscar and the Cecil B. DeMille Award, the Honorary Cesar Award and the Donostia Award. Lauren Bacall is one of the great female stars in the history of cinema. The American Film Institute considers her among the 20 greatest female stars of all time.

On the morning of August 12, 2014, Lauren bacall died at her home following a stroke.

Lauren Bacall is considered a cinema giant. At 88 years of age she was still acting. Her last role was The Walker, which was presented at the Berlin Film Festival.