The world of wine in Mexico 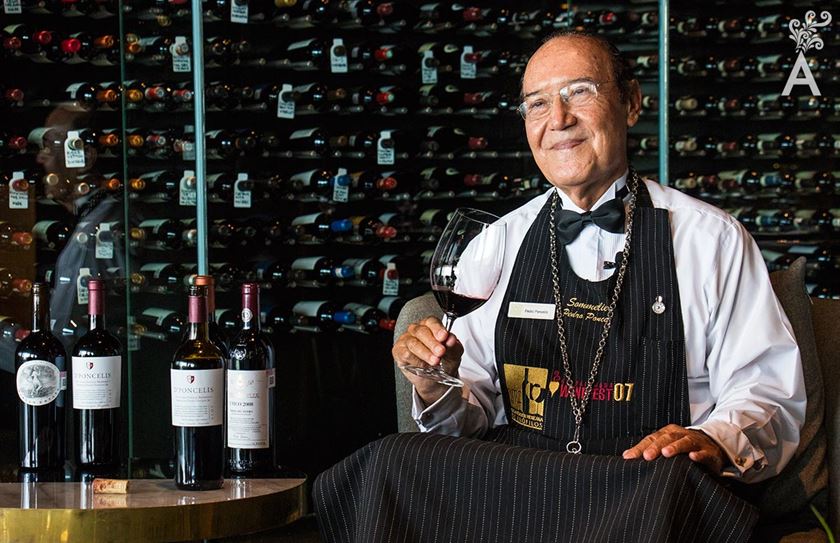 While working in the restaurants of the Grand Velas resort, Pedro Poncelis has tools and clothing that elegantly identify him as a sommelier. He began our talk with words that denote his knowledge and he spoke with respect and enthusiasm about his profession. Pedro was named 2000 Sommelier of the Year by the Mexican Association of Sommeliers.

Perhaps one of the world’s oldest professions, being a sommelier today is a coveted, specialized and recognized position. The “sommier” or “sommerier” in medieval France was the person in charge of watching over the most important cargo that animals carried, among which was the wine. Then, the sommier himself supervised the unloading and made sure that everything arrived in an undamaged state. Subsequently, he was solely responsible for transporting the wine. With the passage of time and the typical distortion of language, that term became the current word “sommelier.”

Mexico is celebrating 25 years of wine appreciation. The courses and graduates taught by Juan Muñoz Ramos beginning in 1992 played a major role in absorbing the vast knowledge of the land, climates, areas of production, grapes and especially the forms of wine consumption. As a result, his students, including Pedro Poncelis, have continued to teach the subject.

At 75 years of age and with 52 years in the wine industry, Pedro Poncelis explained that the world of wine is so vast that one never stops learning.

“I am a chemical engineer by profession, however, I have studied more wine than engineering. And I’ve never stopped learning. At first I was abstemious … it requires training the palate and the senses to venture into this industry.”

“Anyone who wants to excel in this environment must really want to be a sommelier. After that it is study, study, study … A lot of reading and a lot of study. There are very good universities in Mexico equal to a European level, but it is not enough to just be there. You have to take advanced courses, travel, attend tastings and drink wine!”
[/two_first][two_second]
[/two_second]

Don Poncelis is recognized for having created the largest wine cellar in Latin America: Au Pied De Cochon at the Presidente Intercontinental Polanco Hotel in Mexico. The cellar has the capacity for 50,000 to 100,000 bottles and holds 2500 labels from 20 different countries.

However, there are three moments in his life that stand out as the most important in his career.

“The first moment I remember was having been selected to represent Mexico at the 1997 Sopexa Grand Prix wine competition in France. I did not win, but I was among the 10 finalists. We are talking about the best in the world here. I identified 4 of 5 wines tasted in succession through blind tasting.”

In 1998, as part of the International Sommeleria Association, Don Poncelis was selected to compete in Vienna, Austria. “I did not win there either. However, the experience and knowledge I acquired were the greatest reward. This was my last international competition and I decided to contribute my knowledge to young people through teaching.

The third moment came in 2000. “I was invited to participate on a jury for the first time in Toronto, Canada. It was another unforgettable experience that I will carry in my memory forever.”

Mexican wine has been slow to develop. The greatest growth happened in the 80’s and 90’s. Commercial sales raised its profile, allowed international competitiveness and created the product we enjoy today.

“I have known the wonderful world of Mexican wine for 52 years. It all began when I worked for the transnational company Seagrams. At that time Santo Tomás, L’acceto, Domec and Casa Madero were the only existing markets.

Today, wine is produced in 10 states of the republic and there are more than 1000 Mexican brands offered by small, medium and large wine producers. Mexican wine has participated in blind tasting competitions in different parts of the world and has gained worldwide recognition.”

Encouraged by Pedro Poncelis Jr., the members of the Poncelis family are committed to the world of wine production. Father and son trained together before starting their business nine years ago.

The limited production D’Poncelis wines combine Shiraz, Grenache, Tempranillo, Cabernet and Mouvedre grapes to tempt us with a style of rose and two reds that captivate the palate.