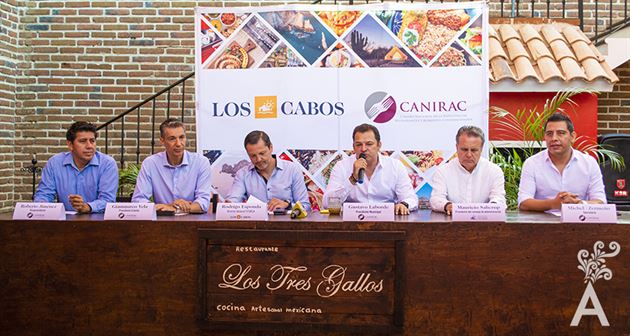 On each trip, the memories that remain in the traveler’s memory are those same experiences that attract them to return again and again. In Los Cabos the aromas, flavors and products used in restaurants exalt the gastronomic offer!

The National Chamber of the Restaurant of Restaurants and Food Spiced in Los Cabos has approximately 200 registered restaurants, which join efforts to maintain a level of service and processes of handling the product of excellence. All with the aim of raising the experience of diners in each consumption center.

“It is a pride to maintain working ties with FITURCA for the promotion of the destination. This year among the events that CANIRAC as considered to support are the VIP Summit, San José Restaurant Week, Sabor a Cabo Rural and of course the great Sabor a Cabo by American Express.”  Gustavo Laborde municipal president CANIRAC

Rodrigo Esponda, director of the Tourism Trust of Los Cabos commented that it is always a pleasure to celebrate the gastronomy of excellence of the destination and give a framework to CANIRAC, an organization that shapes more group projects and has allowed to embrace a synergy that finally, it makes gastronomy a differentiator of Los Cabos with other states of México and countries of the world.

“Thanks to the joint work between FITURCA and CANIRAC, Los Cabos will participate in two of the most important tourism events with a gastronomic sample of what this destination has to offer the traveler. México Tourism Expo 2020 (in the City of Mérida ) and the National Meeting Industry Congress with an expected attendance of 500 people, to be held from August 21-23 in Los Cabos. ” Rodrigo Esponda general director of FITURCA

In the signing of the agreement were present Giammarco Vela, president CANIRAC state and Mauricio Salicrup president of the Board of Directors hotels. Sample of the unity that exists between the business sectors to reinforce and give continuity to the work carried out by Los Cabos.

It is important to highlight that gastronomic events are not only for visitors, but also for all those who live in Los Cabos. The residents are the main promoters and custodians of this destination. Throughout the year we can participate in the permanent #YoSoyMysteryShopper promoted by Culinary Awards Los Cabos. Similarly, events such asl Sabor a Cabo are an excellent platform to try new restaurants.
Download your culinary guide and consult our issues to learn more about gastronomy in Los Cabos!