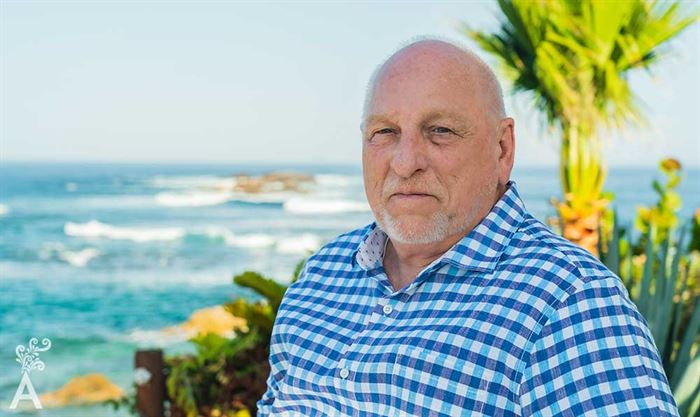 The magic of meeting talented people is incredible, but who also know how to encourage a whole team of partners and collaborators. In Edward J. Hooton we perceived gratitude for the path he has traveled and he always keeps in mind the people who have been influences in his life.

Where are you from?

Originally from the state of Oregon. I came to Mexico in 1982, but my first trip here was in 1974. I came to visit a friend in Acapulco, and we spent four months driving all over the country. That was the moment I fell in love with Mexico and could never get it out my thoughts.

So, in 1982, there was a big recession in the United States, and I got an offer to come to Mazatlán to work in the timeshare industry. I thought, well, I’m not doing anything else and I’m not married. I thought I’d live on the beach, in the sunshine. I’d work four hours a day and be able to enjoy the nights in Mazatlán. That’s not a bad deal, I thought! I couldn’t imagine building a career in Mexico.

I never looked back.

What is your experience in Real Estate?

I actually started in the timeshare industry and, at the time, I worked with people that were very much pioneers in the business. These were the early days of time share. It had only been around for about four or five years, but there were already some successful time share properties. So, I came down, got to work and found that I really liked the business of tourism. I rose quickly in the ranks and went from salesman to sales manager to sales director in a short period of time. That pretty much launched my career.

A few years later, we moved from Mazatlán to Puerto Vallarta. Tourism was down in Mazatlan and there was a bad recession in the United States. However, Puerto Vallarta was different. Tourism was doing well. The same group of guys who were in Mazatlán met a Canadian developer from Vancouver, British Colombia. He built condominiums and we formed a company. He built them, we marketed and sold them. My adventure began.

When did you move to Los Cabos?

The people who I was working with, Villa Group, made up a company that was completely vertically integrated. I was Director of Sales, not a partner. However, we were a company that purchased land, designed the buildings, and furnished them. We were the first in Mexico to design, build, and time share, specifically for the time share traveler. We included kitchens, daily maid services and all the other conveniences necessary for being on vacation. I worked my way up in the ranks and became Sales Director. But, you know, I wanted more. I had kind of reached my peak with them.

I will be forever grateful for the Villa Group, from Fernando Gonzales to Luis María Torres, to Owen Perry, to my brother Bob Kistner, to all those guys. We were a fierce team and they have obviously continued to be successful. But I wanted to be a developer and be able to grow. To be honest, I was not going to get that opportunity with them.

We were fortunate to save some money, so we took a leap in faith. I had a friend who I knew from Mazatlán and he had moved from Mazatlán to Los Cabos. He came here to work with Luis Coppola (his family is one of the pioneers along with other important families). My friend kept telling me, “Come on! You have to see this place!”

I came to Los Cabos on April 10th, 1989. I was shocked. Beautiful, unbelievable beaches, and a small town. In a way it was as if tourism had not yet reached here. It was more of a fishing town. There was a raw beauty. Somehow, I knew this was the place I needed to be. I went back, resigned my job, and moved to Cabo San Lucas.

Instead of being an employee, I became my own employer.

What does teamwork mean to you?

Teamwork means trying to get people involved. I get them to buy into the entire concept and to share a common goal, which is to find success in whatever you are pursuing.

What do you like the most about working in this destination?

Well, let me say this: The people of Los Cabos are wonderful. They are open, and just like everybody else, they want to give their children an opportunity to grow, to have an education and to make a good living. For me, the weather here is spectacular 10 months out of the year and the environment is very welcoming to Americans.

The people here have been so welcoming. They are really service oriented and will give you their shirt of their back. That’s probably one of the greatest and most beautiful things about Los Cabos. It’s not just a destination in terms of the beaches and climate, golf courses and other physical attributes, it is the people here, it is the culture.

My daughters. And the young men and women who work for me, although I do not believe they work for me, I believe we work together. That’s really the thing about teamwork. I understand because I was them back then. To see them grow and get more skill is something that I enjoy here in our company.

If you want to earn more, you must learn more; meaning that we must never stop learning. It is an ongoing communication process. And, of course, there is the golden rule: treat others as you wish to be treated. That actually goes without saying, but we say it anyway so there is no misunderstanding.

How do you see your company in the next few years?

Well, can you tell me what the new normal is going to be? We don’t know. What we do know is if we want to go forward, there are a few things that have to become kind of the norm for us.

We believe there is a tremendous opportunity here in Los Cabos to continuate to grow. Part of that is to redesign the homes to become energy efficient. The future is sustainable tourism, sustainable development. We have a philosophy called “less is more.” I don’t want to see high rises or high density. That will ruin this destination.

This is not a fishing village anymore. This is a well-renowned resort destination and people from all over the world want to come here because of the climate, the quality of the food, the beaches, the golf courses and five of the most important luxury hotels in world. Not only that, we have thousands of Americans that are retired or have a second or third home here in an environment that is safe and secure. That is pretty cool, if you ask me.

If you ask anybody who has been here for 30 years or more, they will tell you that the golf courses literally changed the destination. The first golf course changed it from a fishing village to a recreational destination. Then Palmilla started to become a more important brand. Today, I call it the “grand diamond.” It truly is the grand diamond of Los Cabos. At the Villa Group, we built the first spas here. That also brought a whole new aspect to tourism. Instead of just a man’s destination, it became a place for wives and families with all of the benefits of a luxury hotel.

Chef for Los Cabos & Community Alliance united for the... Previous
Our new health and safety programs Next