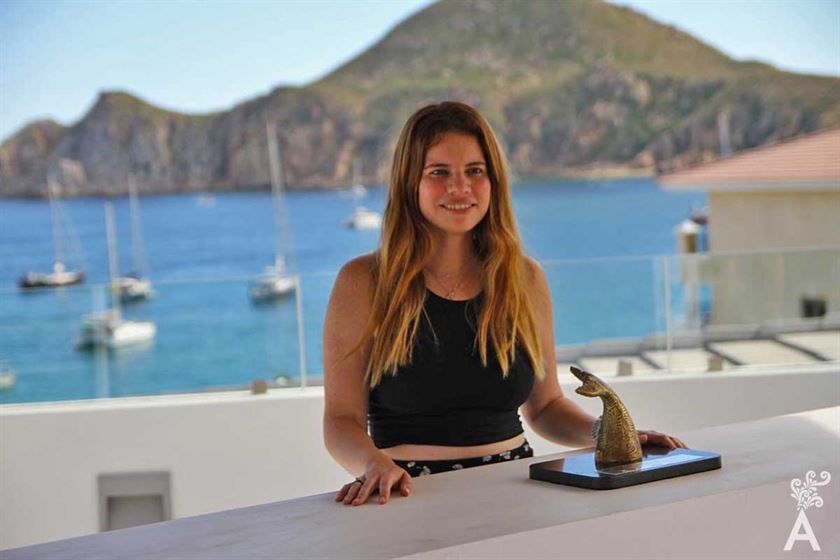 Originally from Mexico City, Ana Molinar considers Los Cabos her favorite place in the world. She enjoys meditating by the sea, visiting new restaurants, going to the beach and running around the Cabo San Lucas marina. The feeling of belonging to Los Cabos has made her consider herself a Choyera.

In 2014, Ana officially began working as a communication manager for the Los Cabos International Film Festival. In 2017, she was put in charge of the Marketing Department. Managing sponsorship teams, the media, communications, volunteers and tourism strategies requires her to travel up to twelve times a year to Los Cabos.

“I admit that after the festival, I fell more and more in love with this place. I am truly your promoter at heart. Telling the world about Los Cabos is my contribution to the community. As a marketing department, we try to ensure that both international guests and invited media always keep the destination in mind and that they choose it for a vacation or even a movie set.”

The marketing team works throughout the year with the official media to attract visitors to Los Cabos. The team publicizes exclusive hotel offers, natural attractions, tourist services, gastronomy and local culture so that the economic output benefits everyone.

“We try to immerse the invited media in culture, from the hotel where they stay and what they eat, to the nightly events and parties. We want to communicate beach, luxury and service. We have been told that compared to other festivals, we spoil the media too much. In reality, that’s the way it is in Los Cabos. It pampers you!

Los Cabos International Film Festival is strategically held during the time of year when the whales start to arrive. The creatures are inspiring. The transpeninsular highway itself provides a unique experience. No wonder experiencing a film festival in Los Cabos is totally different from those in other cities around the world.”

For Ana, the details are in the simple things. The nature that surrounds Los Cabos is a reminder of that fact. Perhaps that’s why it has captivated screenwriters, film producers, artists and more.

Los Cabos International Film Festival has positioned itself among the top two in Mexico. Netflix considers it the window to Latin America. The festival’s Los Cabos + program focuses on the discovery and development of young talent in both Baja California Sur and the rest of the country who are interested in the film industry.

Tendencia has always been present at the Los Cabos International Film Festival. For as long as I can remember, it has been an important name in this destination. Interestingly, we place content on their platforms first because of the message it sends to possible sponsors.

Why did you decide to work with Tendencia as a partner for promoting Los Cabos International Film Festival?

Their continuous presence at the festival and the hard work that goes into in each edition demonstrated the impact and influence of the magazine on both the local community and the segment of the tourism market where it is directed.

As an advertising opportunity, they are experts who know the destination, the history and they generate valuable content. It was simply the ideal medium. We begin the alliance as an official Media Partner in 2018.

The relationship has been based on mutual trust since the beginning. The genuine interest in strengthening Los Cabos unites us, like a friendship behind the scenes. I’m sure the creative way they highlight and document the strengths of the Festival in each edition will preserve the alliance in the long term.