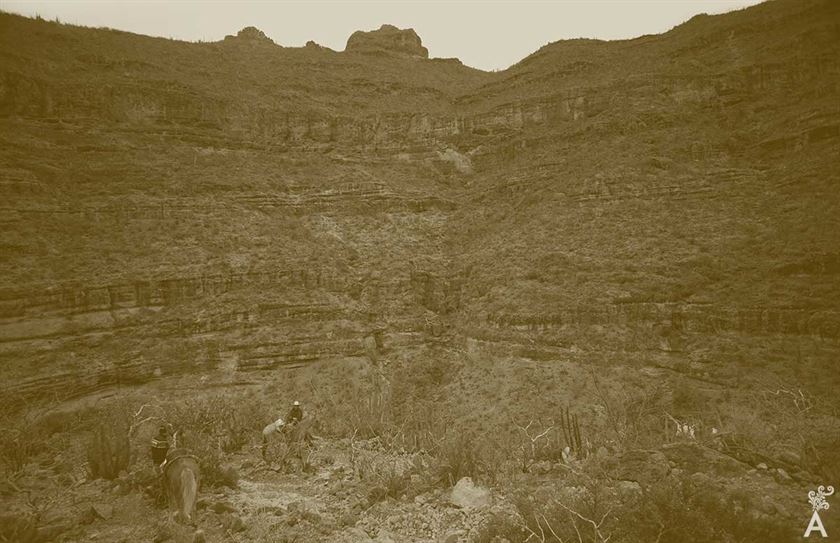 The saga of Uncle Locha

From the top of a hill of colored stones piled on the side of the narrow path, he squints and looks southwest towards the infinite horizon. Whitish saltpeter is full of elongated mirages, sailing ships, and trees. And in the background, but still far away, are the dunes and stones of Punta Abreojos.

He has left the palm groves of San Ignacio Cadacaamán, on the border of the El Vizcaino desert, three days before. Mounted on the huge mule he always rides, he is leading a procession of twelve Abyssinian donkeys, each loaded with six twenty-liter cans of water that were filled at La Berrenda’s Mesa. They represent his life and that of the animals over the following weeks.

He finally crosses the last saltpeter deposit to reach the sand dunes covered with brush and concludes his trip. First, he unloads the donkeys, arranging the cans so that they form an L-shaped wall as a shelter from the northwest winds. The previous season, a tarpaulin tent was anchored in the dune covering the panga, oars, sail, fishing line, hooks and spears to protect them from the brackish breeze and the bite of the sun.

Before dawn, still in moonlight, he pushes the panga on pine logs and, standing in the stern with his right leg pressed against the hull of the boat, and paying no attention to the squeaking of the oars in the metal locks, he rows with vigor to cross the breaking waves. A dirty sail is raised on the mast and the panga is propelled over the surf. The Pacific Ocean meets him with cold drops of salt, salt, salt.

After a ceremony that marks the beginning of each fishing season, he calculates the rhythm of the swells and sails down the back of a wave through a narrow channel next to a black point of rock that juts from the shore. He names the site Punta Abreojos.

Once in the open sea, with his machete slicing through the surface, a great variety of fish and several sharks with their huge livers await him.

It is May and a vigorous rain waters the fields in Verdun. Here, in ancient California, two miles off the black point of Abreojos, a sturdy boy with brown, straight hair, raises a heavy steel harpoon from his right shoulder and throws it with all the might of his arm into the bright back of a hammerhead shark. The shark turns furiously and passes under the boat showing its attacker the whiteness of its triangular teeth.

When the square cans have been filled with shark liver oil and secured on the burros, he once again buries the panga and the fishing gear and straddles his mule to begin another long journey. They travel through the desert by the saltpeter deposits, the hills of red lava, La Berrenda’s Mesa, the burning dunes of El Rabich, the dry stream of San Angel, the oasis of San Ignacio where he will redistribute the load and restore the energy ne requires to cross the sierra by the volcano of Las Tres Virgenes. In time, he arrives at the port of Cachanía, in the Gulf of California, where a three-masted French ship will load the liver oil and take it to Marseille.

Beginning in 1914, José Rosas Arce, Tío Locha, crossed the peninsula every year over trails previously traveled only by Cochimie Indians to set up his fishing spot on the fine sands of Punta Abreojos. Others would follow over the course of the 20th century. They would establish fishing cooperatives (abalone, lobster, grouper, jack mackerel, clams and more) that created a life for industrious peoples in the North Pacific.

A Story from the desk of Laura G. Bueno Previous
Californian Literature Next