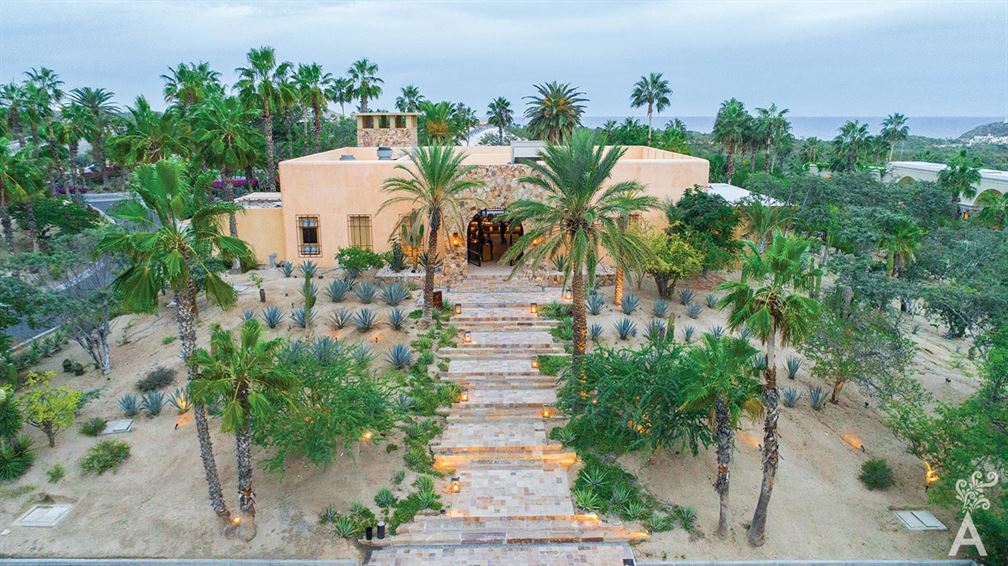 Baja California Sur is the ideal location to incorporate architecture into nature. The range of colors, shapes, and textures contribute enormously to this artistic expression and constantly create new challenges.

Mexican architecture has been recognized for several centuries. The cultures that first came to our territory developed civic and religious centers that attracted a growing population. In the days of pre-Columbian architecture, there were large open spaces and visual axis that served for the layout of cities in subsequent eras.

Although these cultures did not flourish on the Baja California peninsula, the nomadic migrations that arrived also had their merit and no lack of architectural ingenuity.

Our pre-Hispanic history was very broad in architectural expressions. To name a few, we find the Olmec, Mayan, Totonac, and of course Aztec and Teotihuacan. Many of them developed spectacular associations between their pyramids, buildings and ceremonial centers with astronomy and the sea.

Later, during the periods of conquest and evangelization in Colonial Mexico, impressive changes occurred. Of course, the artistic changes were perhaps the most dramatic and intense.

The appearance of forts, barracks, convents, missions, churches, and educational centers substantially modified the architectural themes that were constructed up until then.

The time of colonization was one of the periods where the architecture and interior landscape on the Baja California peninsula began to develop and various elements started to appear. For example, interior patios, arches, framed windows, fountains and waterfalls. Water, and above all the integration of natural elements, played major roles.

In terms of local architecture, let’s say Californian to position us in a geographical context, the missionary period had a powerful influence that is much respected and replicated to date.

It is also necessary to recognize three very important cultural currents that for different reasons converged on the peninsula. One was the periodic arrival of the Nao of China and the influence on commercial, cultural and demographic matters. Second was the European expeditions that brought the evangelization and, consequently, the missions. Finally, there was the creation of the states of Mexico. Each brought different uses and customs that impacted the development of new local cultures.

Of the three religious orders that arrived, the Jesuits, the Franciscans and the Dominicans, perhaps the Jesuits made the greatest impression in the fields of building design and construction. It is impossible to ignore the culture that had developed in Europe and the influence of the great Jesuit architects. In fact, the Baroque style that prevailed in several missions contain elements that are still used today, including quarried stone, adobe, arches, domes, annealed brick and more.

The theme of the missions in Baja California and Alta California (currently the USA) is fascinating, because it is perhaps the most orderly and important artistic heritage in the area.

In our state, the change of economic vocations and almost permanently influenced construction. At the beginning of the last century, just over one hundred years ago, most houses were still made of adobe and natural materials. Rather few were built of solid materials and those that existed were usually religious, educational and government buildings in La Paz, San Jose del Cabo, Loreto, Santa Rosalia and El Triunfo.

It is important to remember that the peninsula was characterized by an economy based primarily on fishing, agriculture, livestock and mining, and remained so for many years.

Due the natural beauty of the beaches, coast lines, the Pacific Ocean and the climate, the logic was to direct efforts towards the tertiary sector of the economy: tourism.

With the appearance of the first hotels, the architecture was also substantially modified and rapidly evolved. However, the Californian influence of the 1950s is still present in several developments.

Even though the Municipality of Los Cabos contains an impressive collection of hotels with substantial architectural value, the horizon is still very promising, and many more will open their doors soon. Of course, the greatest natural wealth is the more than 600 miles of beaches that surround Baja California Sur. There is still much to see and explore. It is well worth taking the time to understand what has been done in this thriving Municipality of Los Cabos over the past six decades.
[/two_first][two_second]
[/two_second]

Since Los Cabos is a Tourist Municipality, it is obvious that there is special interest and development in the hotel and services sectors, including golf, outdoor activities, sport fishing, ocean tours, and alternative tourism. However, residential and architectural landscape projects have also grown exponentially. Not only in number but in quality. There are buildings that are truly challenged by the laws of nature and reflect the individual style of famous architects and construction firms.

As in any other place in the world where development far exceeds the average rate of population growth, there are challenges with planning and the urban landscape. Nevertheless, the concerns of all the parties involved have been voiced and are being seriously considered. At the same time, those challenges present an extraordinary investment opportunity.

Finally, it is necessary to emphasize that regardless of the scope of the construction, whether residential or commercial, art is present in Los Cabos. Very important collections of paintings and sculptures adorn walls, corridors, salons and reception areas of most hotels. Enjoy your favorite cocktail in the lobby of a hotel and admire the works of art.

Walk through the streets of the Historic Center of San Jose del Cabo, every day you will find something different to do. The restaurants, galleries and design stores give a special charm to this area. Explore the nooks and details, talk with the artists about their exhibitions, will emphasize the speech behind their work. Identify yourself with some style, enjoy our culture! Something about the beauty of Mexico can be found here that cannot be easily overlooked or ignored.