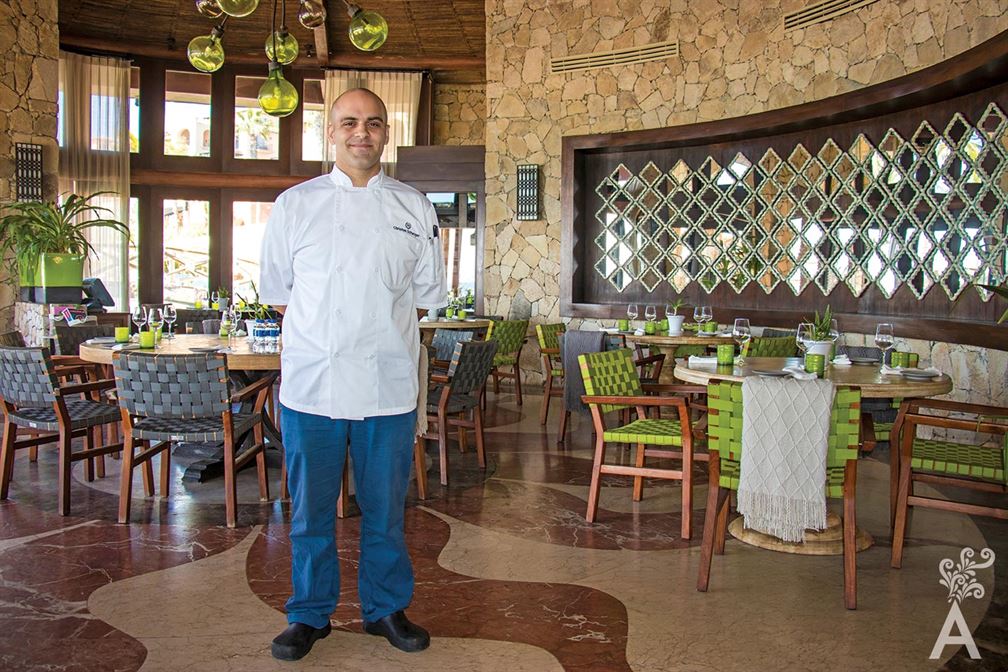 Anyone who visits De Cortez Grill and Restaurant should be prepared for an unparalleled dining experience. With great passion, the Chef and his team provide a level of service and cuisine that can only be described as multisensory.

Chef Cristian Schwuger graduated from the Argentine Institute of Gastronomy, where he combined his studies with his work. Influenced by the cultures and flavors of Croatia, Spain, and Italy through his grandparents during his childhood, Christian combined his experiences with Argentine cooking.

“I started in Argentina and studied in one of the finest institutes in South America commanded by Ariel Rodríguez Palacio. When I was 16, I found that cooking could quickly lead to a job. Argentinian food is good to eat so I did well at that age. I decided to formalize my study, but my real influence continued to be my family, especially my mother.”

After hours of service in one of the first Relais & Chateaux Hotels in Argentina, Chef Cristian understood that his professional development was dependent on him achieving the most demanding professional standards. He set his sights on the Alvear Hotel under the management of Jean Paul Bondeaux, one of the first Frenchmen to bring Argentine cuisine to a luxury hotel. Later, he spent two seasons in La Bourgogne in Punta del Este Uruguay, and time in the kitchens of Mirazur in France, Paraguay, Brazil, Santiago Chile and one year in San Sebastian in the Basque country of Spain where he learned from Hilario Arbelaitz, the father of the new Basque cuisine.

“Travel and working with a number of impressive chefs have marked my career. Jean Baptiste Pilou is someone I consider to be one of my great references and working as a chef in the Basque culture impressed upon me that any time of the day is good for cooking and eating.”

In 2013, chef Christian moved to Chile to take command of the kitchen at the Hotel W de Santiago. The first challenge the chef faced was to go beyond the plate and understand that hospitality stretches from the arrival of the dish at the table to the experience people take away from the restaurant.

“I came with a restaurant imprint who knew there were two different parts to the field. I was venturing a bit into hotel gastronomy and I found a very nice niche. It’s not just cooking. It goes from setting up banquets, events, even overseeing the decorations. I would contact the suppliers and combine all the elements, not just the kitchen.

A gastronomic hotelier is a difficult trade. You have to have passion. Personally, I dedicate a lot of my life to this occupation. My family is in it, believe it or not, and we hope that the effort is reflected.”

Eventually, Cristian arrived at the Sheraton Grand Los Cabos Hacienda del Mar in Los Cabos, one of the world’s most important gastronomic locations.

“Part of the beauty of Los Cabos is the climate. I never wear a jacket! In addition, there’s the relaxed atmosphere and working life. On top of that, the destination is evolving gastronomically.

I really like the sea and would love to have more time to fish. I also like the desert. Every day, I realize this is a place alive with very interesting things.”

Under his leadership, De Cortez Grill and Restaurant at Sheraton Grand Los Cabos Hacienda del Mar serves as an ambassador and a national benchmark for the finest cuisine and service.

De Cortez is a steakhouse renowned for signature dishes. With the help of the French chef and friend, Gaytan Castan, a fusion of cuisines has been achieved that result in delicious dishes from prime meats, fresh fish and local vegetables.

“At Sheraton, we use many ingredients. First, we take care of and prioritize local suppliers. Miraflores and Pescadero have incredible products and the proximity to the sea adds a salinity to the amazing plants. Let’s not forget the products of the sea! The Sea of ​​Cortes offers delicious ingredients.

Fire, for me, is fundamental. I use all kinds of wood and coals that result in different nuances. Like wine, fire is very capricious. Another capricious ingredient that I love to use is the Chilean merken. It is a mixture of spices where the main ingredient is the a smoked chili pepper.”

The experience that the diner can expect at De Cortez is delicious cuisine, impeccable service, helpful staff, surprising details, and a newly remodeled environment. Everything is aimed at delighting the senses!

With the help of Luis Ruiz Sanchez, the firm of Coffer Estudios was in charge of the remodeling. The goal was to continue positioning De Cortez as the emblematic restaurant of Los Cabos.

Modernizing was one of the objectives as well as creating a more relaxed ambiance. Sheraton Grand Los Cabos Hacienda del Mar is a hotel that already has a history in the destination. The construction project helps maintain the position De Cortez has earned through a more structured look and by highlighting elements such as fire, air and earth, not to mention the stunning view of the Sea of Cortez.

Previous articleRosaura Rodríguez
Next articleArchaeological findings in the Cape region