The climbing of your life at the Comondu 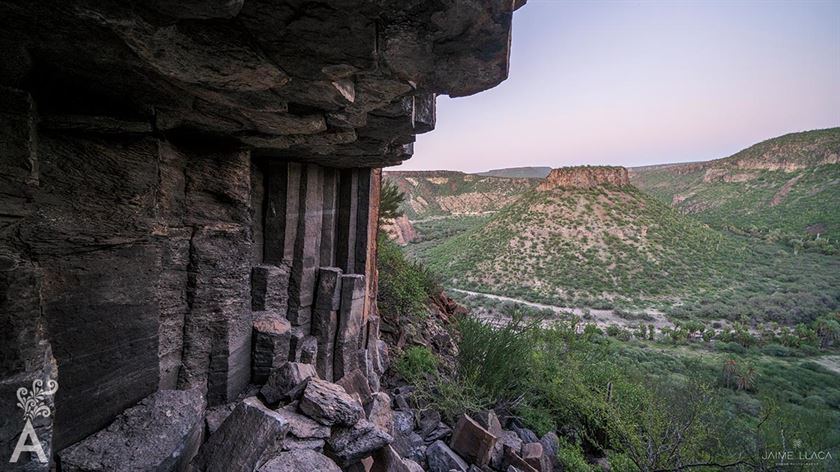 Part I: The basaltic prisms

I was now sure of something: the trip was going to surprise me more every time. San Miguel de Comondu and San Jose de Comondu appeared among hills and mounts by the side of the road. The colors of this new scenario were green of the vegetation with reddish tones of the rocks.

Almost at the entrance of San Miguel de Comondu we passed a small reservoir with a pickup truck submerged up to the rims. It seemed to be in trouble. Two men standing on it looked very busy. In front of it, there were two girls in shorts and t-shirts, one carrying a dog and the other one carrying her daughter.

Claudia del Pino, our general director at Tendencia and official driver of the journey, lowered the window worried. “Is everything OK? Do you need any help?” she asked. 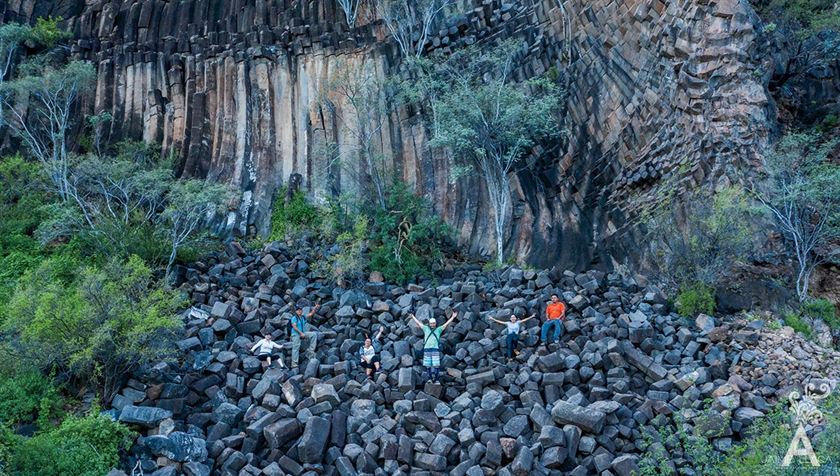 Turns out they weren’t in trouble; the men were simply washing the truck. Since we were there, we gave a ride to the girls, who were running late for school. They sat one on each side next to me, in the back seat. What we didn’t know back then was that we had a queen on board. One of them would be crowned the very next day as sovereign of the community of San Miguel de Comondu in its traditional festivities.

We left them home around three o’clock, just in time for them to enter school half an hour later.

San Miguel embraced us with its striking colors and ancient facades that recalled it had been founded in 1714 by the Jesuits, who had the purpose of educating the communities in livestock farming and agriculture, among other things, as well as evangelizing its inhabitants.

We got out of the cars, stretched our legs, felt the sun on our faces, and entered a hotel with orange walls and natural charm, full of bougainvillea and sunflowers and of small places with magic, like its swing and its museum of antiquities. 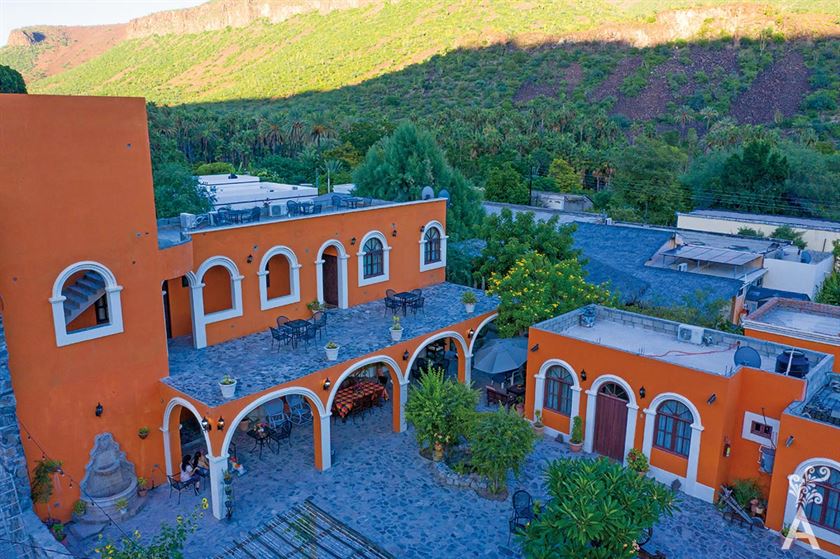 We were greeted by Jacqueline Verdugo Mesa, proud culture promoter of the historical town, lover of Mexican folklore, and owner of that Hacienda Don Mario, the only hotel in San Miguel de Comondu. She was accompanied by Don Virgilio Murillo Perpuli, the town poet. They told us about the missionary grape, which was brought by the Jesuits and is used to make wine, and how San Miguel is a town of traditions and customs, of culture and identity, because it’s the fourth town of Baja California Sur founded by the Jesuits.

Jacqueline also told us that San Jose de Comondu is one of the oldest towns of Baja California Sur—older than La Purisima—and that its mission was one of the biggest in the region. At least until, legend has it, it was blown up by General Dominguez Cota, who supposedly ordered its destruction because he was an atheist. Other stories say it was because children and families used to go inside the mission building, which wasn’t safe. The plaque outside of what’s left of those three naves says it was demolished because they needed the material to build the community school and a private residence.

This is the kind of stories that you’ll find, traveler: different versions, points of view, ways of thinking and being. With some of them you’ll agree and others you’ll question. 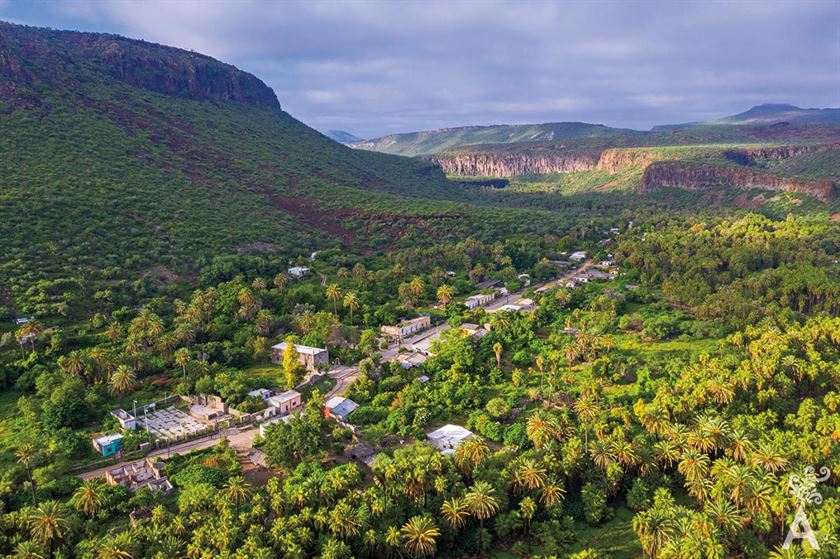 As new lovers of adventure, we planned to visit the basaltic prisms—volcanic stone formations result of an accelerated lava cooling process millions of years ago. Reaching them took all the willpower we could put together.

For these activities, we recommend that you look for a guide. They know details that can’t be perceived at plain sight. In addition, you will support the local economy by creating jobs for the locals. Very often we think we can do it without anyone’s help, but the villagers are more than grateful for your presence and you’ll have the opportunity to experience the nobility of their community.

On this first climb, we were accompanied by Chuy, better known as “the one who does everything” at the hotel. He took us on an adventure through the local flora and fauna, among plants, mosquitoes (remember to use your biodegradable sunscreen and repellent), snakes, and tarantulas. That’s also why you should have a guide: what would you do if you encounter a skunk with rabies? Well, Chuy’s already been through this experience and he’s known how to handle it.

But don’t be scared, there’s nothing to be alarmed about. Follow the directions of your guide, activate your senses that are asleep by so many TV series and work, and discover what lies beyond.

We started climbing a few minutes before six o’clock in the evening. The more you went up, the more you were impressed with your body’s ability to resist and lose the fear. Silence and aromas began to appear. Little by little, the surprising tranquility became part of you. 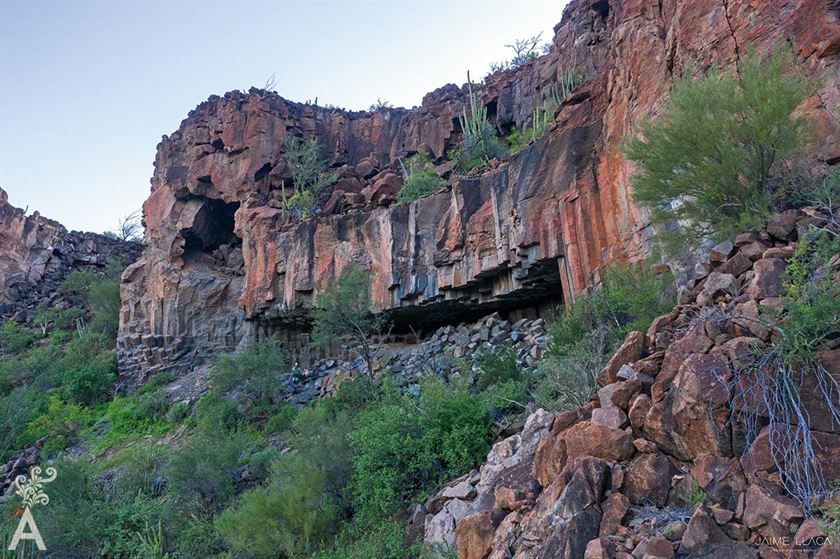 All of a sudden, we had them in front of us. Black and gray giant rocks, perfectly placed in the middle of the vegetation, symmetrical and grandiose. I was startled at the way they were positioned, as if at any moment they could fall down the slope of the mountain. To my thinking, any law of physics was being tested. We stayed around looking at these million-year-old prisms while we caught our breaths.

We had taken our time to reach the top. We didn’t want to miss anything. So, on our way back, it was night already. Chuy recommended another route. The first one, according to him, had been the easiest. So easy I had decided to leave my water bottle and cap on a rock so I could free my hands and move more easily. That would be another recommendation: don’t carry anything with your hands and, if you need water, repellent, or sunscreen, carry it in a small backpack or fanny pack.

The descent was easier. After all, what goes up must come down. The men, always prepared, had brought lamps. We, cell phone lights. Although we climbed down faster, we had to take a detour, which allowed us to see another spectacular scenario: the stars. Our old friends showed up one more time, as we walked in the middle of the highway.

When we finally arrived at the hotel, the cold bath that awaited us and the bed were the perfect ending. Because of what we lived on that first day we thought that one night wasn’t going to be enough and, logically, we decided to stay another one in San Miguel de Comondu. In any case, we had to see our friend, Nancy Adriana Primera, being crowned at the town festivities.

Between oasis and stars Previous
The Whale Festival invites you to welcome the amazing... Next