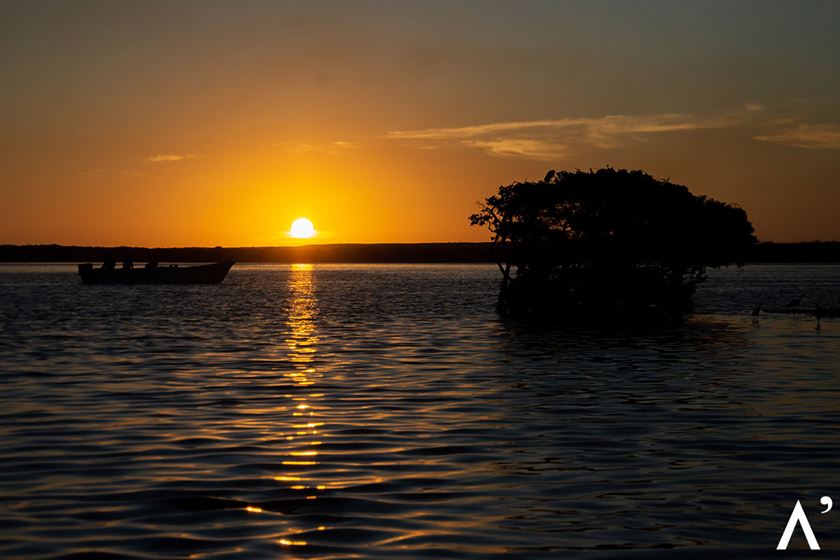 I can’t hide it from you, daring explorer: the famous Padre Kino and Admiral Atondo were looking for a way to get to Bahía Magdalena and, what is now, the amazing Puerto de San Carlos1. They made a secret map that is yet to be found.

In those times, whoever was to find a passable route between the Gulf of California and the Pacific Ocean, jumping over the Sierra de La Giganta, would receive innumerable gratitudes and gifts from his majesty, the King of Spain, Carlos II, “El Hechizado” (The Bewitched One).

Isidoro de Atondo y Antillón succeeded. He arrived on January 1 to the place he named Punta Año Nuevo, which we now know as San Gregorio, even though Bahía Magdalena had been given that name by Sebastián Vizcaino back in 1603.

Don’t go alone. Please listen to me. There can be no true happiness in solitude. And when you arrive to Bahía Magdalena, in the municipality of Comondu, just three hours from La Paz, and stop in Ciudad Constitucion, 130 miles down the highway to turn left, your heart will start to race as you face a multitude of landscapes of beauty and surprise. 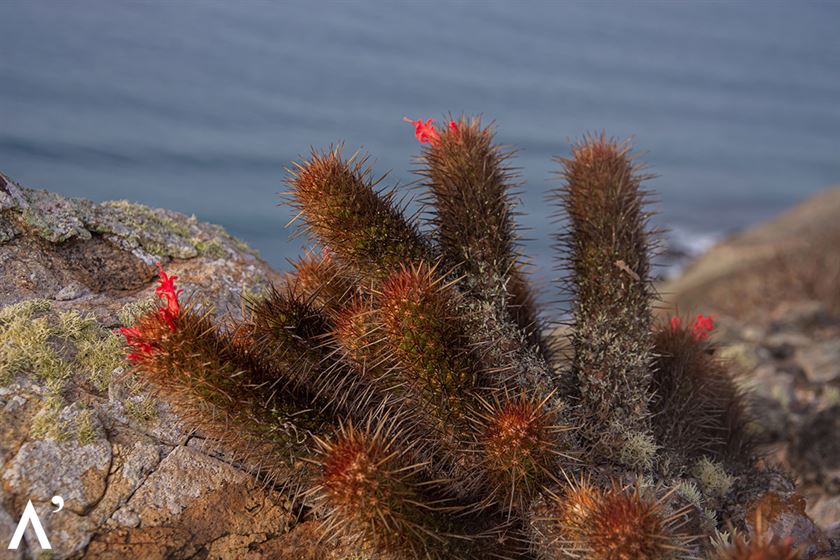 There you have it; life is landscape and surprise. And when the happiness, joy and enjoyment of arriving to Puerto San Carlos overwhelm you with their gift of colors, aromas, infinite skies, good and friendly people, you will start to send non-stop messages, photos, audios and videos to all the people you love and remember.

But arriving to Bahía Magdalena is “a big deal” as Luis Spota, a well-known Mexican writer from Veracruz, used to say in his book “palabras mayores”. We reached the bay through Puerto San Carlos, which is located at Latitude 24 ° 47’19” North and Longitude 112 ° 07’04” West, to take the boats that would take us to Magdalena Island in a few minutes, since it is right across, and there you are hypnotized and seduced by nature. One falls into a “trance” possessed by the beauty and abundance of bird species that welcome you on this short boat tour along with numerous bright fish that jump all around.

I lack space to describe how many beautiful species of fauna and flora you will find. I discovered a wonderful cactus with red flowers at the end of each of its thorny arms and I suppose it was an echinodpsis but ignore me because there are thousands of species in all the surroundings that are a “succulent” visual feast for those who love plants. 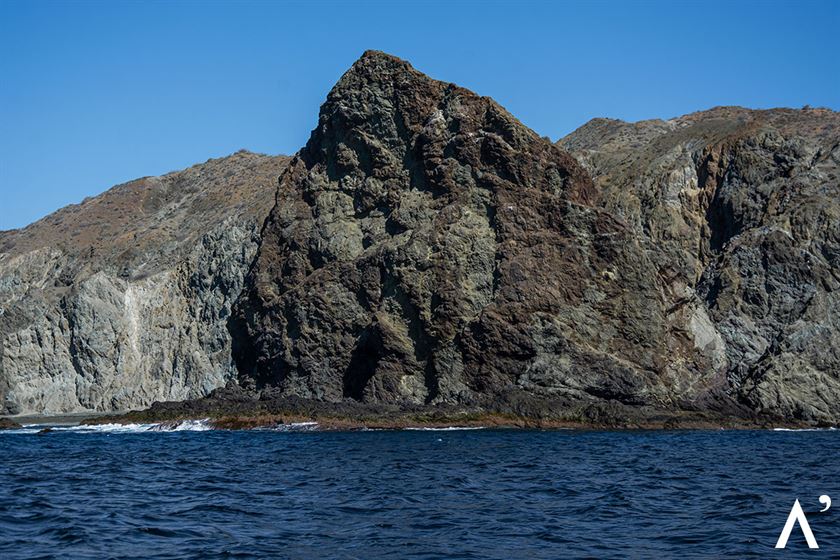 Suddenly, I get a WhatsApp from María Calleja, who knowingly explains that they are the famous “chirinolas” cacti, Strenocenus Eruca, eruca referring to the Latin word for caterpillar. In addition to its local name, this cactus can live up to 100 years and dies in a different place from where it flourishes, a characteristic that has amazed biologists around the planet, because this thorny and endemic plant, as Galileo Galilei said “Eppur si muove” (And yet, it moves), that’s why people from all over the world come to see this marvel of desertic flora.

In fact, it should be forbidden for people like me, who do not know about botany, to write about or describe trees, plants, or flowers, nevertheless, since there are no laws about it, you will have to come and see for yourself the beautiful species I am referring to.

I found them at Chirinola camp, behind my very comfortable safari tent called Las Dunas, which, thanks to Tendencia, I shared with the great guide Óscar Ortiz. By the way, this tent is much better than the one I got in Serengeti back in Tanzania, Africa. 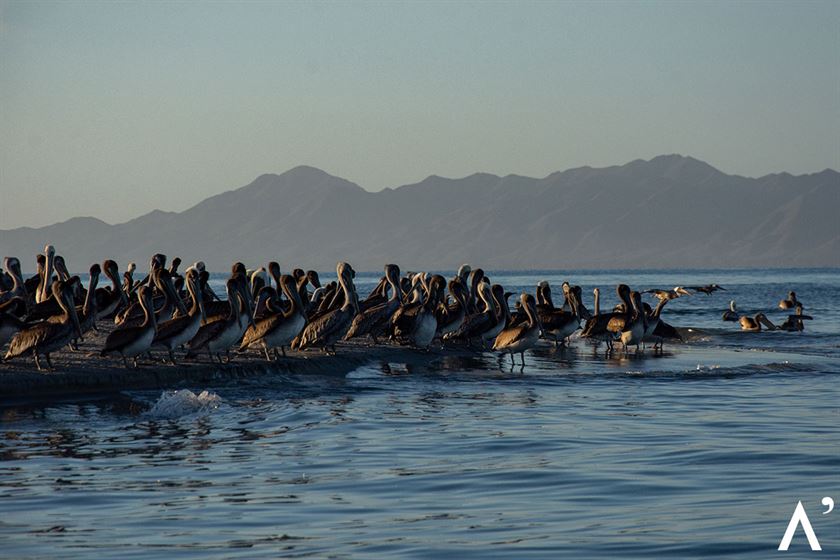 That is why I tell you not to come alone, come with the person you love, with your children or with your best friends, so you don’t spend all day sending photos and videos, like the ones we took of that sunrise in front of Isla de Patos, a place where thousands of birds of various species make their daily assembly, from pelicans to migratory ducks and terns, multi-colored seagulls or gannets proud of having been on planet earth for millions of years.

If you love to eat or are an aspiring gourmand, then definitely don’t come alone. Because the dishes that you will eat at Magdalena Island or anywhere in Magdalena Bay, sitting in front of the table, at an improvised bonfire, on the boat, in a fonda or palapa in front of the beach, will be what Nat King Cole would call “Unforgettable”, like his song that was written originally by Irving Gordon, under the name Uncomparable.

Zarandeado style horse mackerel, lobster, oysters, very fresh shrimp, palometa, pompano, comber, or tuna. There are so many varieties of well-prepared fish and shellfish that you would live a long time eating a different one every day without repeating.

Some other day I will tell you about the very dutiful whales that come here in winter full of love for their young and their mates. 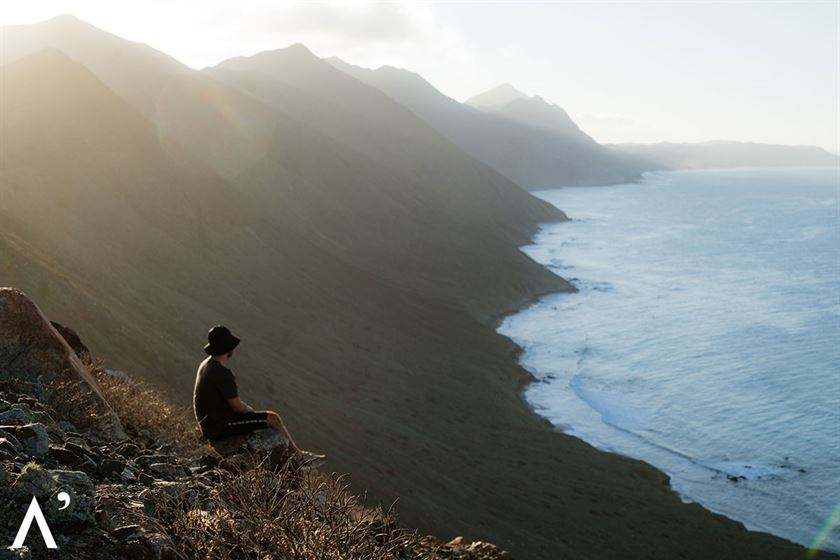 Perhaps this is why Magdalena Bay has such a mysterious history with the longest and thinnest island in the entire American continent. The original map that the Jesuits drew with the help of the Guaycuras is either lost or hidden. I will say it once: this was entrusted to me by my friend, professor Angel Mari Loperena Rota, there in Garralda, Navarra, near the Pyrenees. Today, professor Loperena suffers from cancer of the kind that no one wishes on anyone, and he spoke to me for the first time about his countryman, the audacious Isidoro de Atondo y Antillon, (from Valterra, Navarra 1630, died in Mexico in 1691). Sailor, discoverer, governor, and admiral. They, he said, referring to the Spanish explorers, were in a hurry to find the best route, not just for evangelization reasons, but for economic and military reasons.

The map corresponds to the first expedition to California led by Isidro Atondo y Antillon, governor of Sonora and Sinaloa, in 1683, which included the Jesuit missionaries Eusebio Francisco Kino, who also acted as cosmographer and cartographer, and Matias Goñi.

Upon reaching the Pacific, Atondo made some explorations along the coast up to latitude 26º, where he discovered a bay which he named Año Nuevo (New Year), for having arrived there on January 1, 1685, today known as Punta San Juanico (26º 4 ‘19.7 “N, 112° 18’ 29.2” W). In all these explorations Father Kino marched along, an Austrian-Italian Jesuit missionary, explorer, cartographer, geographer, and astronomer, named at birth; Eusebius Franz Kühn recording everything. 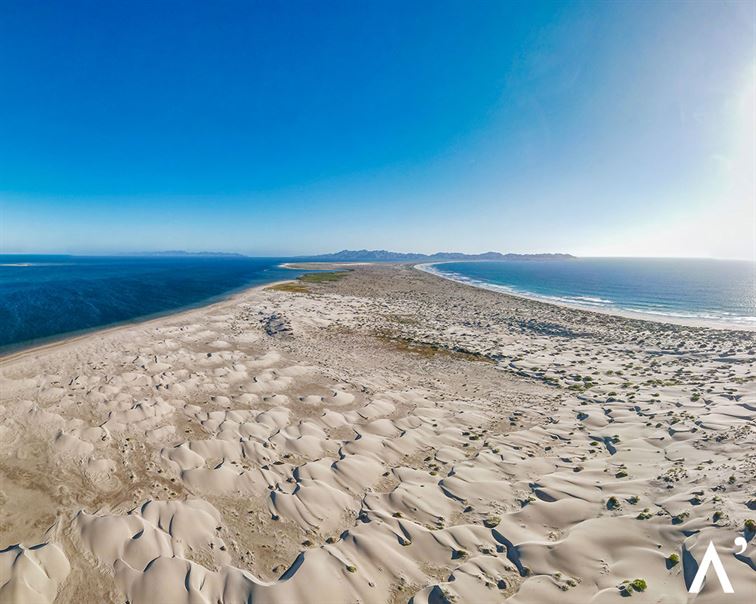 During our travels we remembered him as we drove to San Luis Gonzaga with Claudia del Pino, and Jimena Estrada, on our way to the fabulous mission that Johann Jakob Baegert de Schlettstadt, originally from Alsace, founded very close to Puerto San Carlos.

Upon arrival, we had a great talk with the Espinoza family, so cordial, distinguished and knowledgeable about ranching skills such as: weaving natural bristle ropes with the coiling tool known as “tarabilla”, or growing grapes a few yards away from where Father Lambert Hostell, from Münstereifel, Germany, who grew himself back in 1730, when he was in this oasis, that the native Guaycuras, called Chiriyaqui,

Magdalena Bay is 31 miles long along the western coast of Baja California Sur. The bay is protected from the Pacific Ocean by the magical dunes and metaphysical sand barriers of the Magdalena and Santa Margarita islands. It is well known for the seasonal migration of the gray whales during winter. For fishermen it is also a true paradise, where the extraordinary relationship of mangroves, meanders, lagoons, marshes, sanctuaries, and those majestic dunes, that deserve thousands and thousands of photos and videos that are taken with cameras, cell phones and drones of all kinds, play a special role in the biological and ecological cycle. 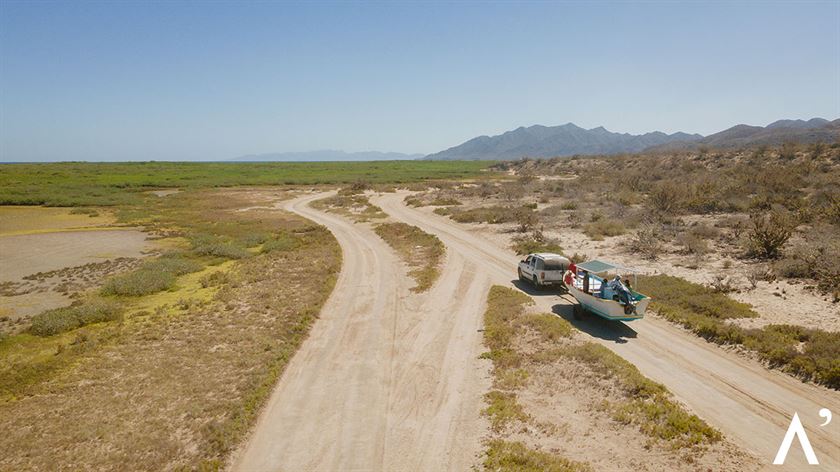 The dunes have never complained about their talkative visitors and every day they change their textures or pleated outfits so we can have unique and unrepeatable photos. That’s how generous they are, as they surprise us with either shy crab nests, or perfect footprints of curious and playful coyote families that arrive with their young without disturbing anyone.

How could I imagine the starry skies that awaited me, on that morning when I left Cabo San Lucas with the Tendencia team excited to “discover” these wonders of nature and human work.

Even when we stopped at Km 112, near Las Pocitas to try a delicious fresh cheese in the traditional handcraft restaurant Don Manuel. I had to thank heaven that I did not have cash with me, because I would have bought all those incredible chairs made of leather strips and “palo de arco” wood, cowboy jackets known as “cueras”, and rancher knives in their artisanal sheaths of various leathers and tasting the traditional sock coffee from these lands. 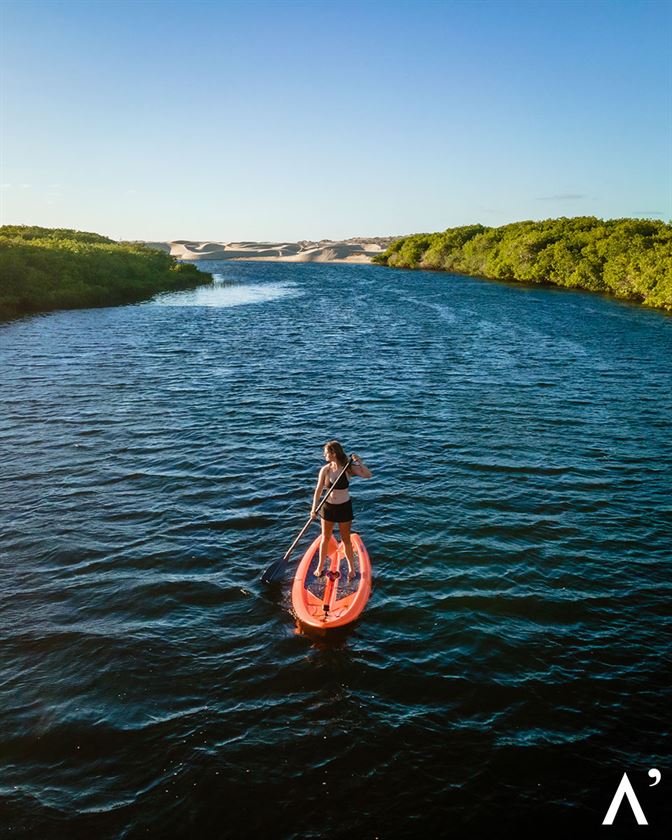 I didn’t even ask the lady who made us the quesadillas the price of the ancient whale shoulder blade decorated with ocher and black cave paintings, which are one of my unspeakable passion’s, but now I confess, to convince you not to come here alone to enjoy, learn and be happy.

But hey, Magdalena Bay is also part of the hemispheric network of shorebird reserves as a regional category site that saw, in 1908, an American fleet of sixteen battleships on a cruise around the world, the Great White Fleet, which stopped at the bay for thunderous artillery drills. In 1912, Japan tried to buy the port. Barbara Wertheim Tuchman’s book, The Zimmerman Telegram, mentions that both the German Kaiser and the Japanese Emperor were trying to use this bay for military purposes before World War I.

Puerto San Carlos belongs to the beautiful municipality of Comondu derived from a Californian indigenous word of the Cochimí ethnic group: caamanc cadeu, which means reed in a stream. There were also indigenous Guaycuras. The word cochimi means men from the north. The word guaycura was taken by the Spaniards from huajoro, a word that, heard for the first time, they understood to mean friend.

In short, I could spend many voyages whispering discreetly in your ear tales about the explorers of the peninsula. Life is a map.

A connection with infinity, being Previous
Puerto San Carlos, starting point to explore Magdalena... Next