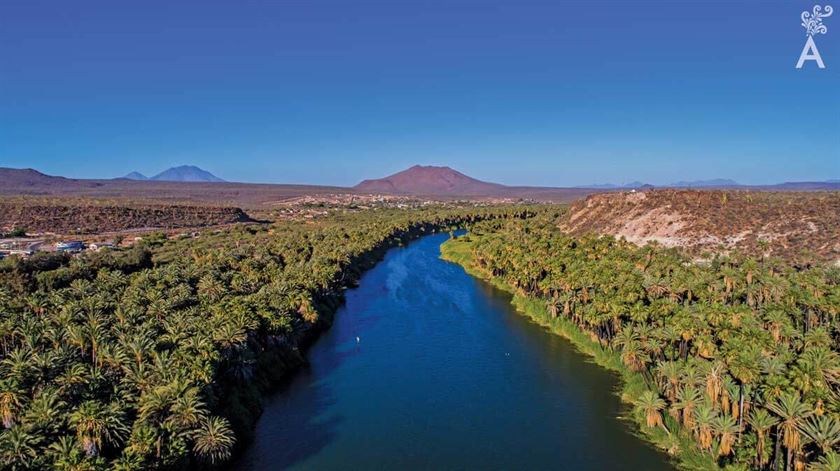 Shaded by date palms, San Ignacio is a paradise in the middle of a desert. Venture beyond the bulrushes and marshes and you can find a serene lagoon that is home to the gray whale during the months of February and March.

The population of San Ignacio is mostly fishermen. However, the town has also been called “the gateway” to the cave paintings of the Sierra de San Francisco. The cave houses spectacular murals that allow us to see into the past and to know a little about the life of the first settlers.

In addition to the natural spectacle of the vegetation, the characteristics of the area are ideal for outdoor activities such as hiking, mountain biking, bird watching, kayaking and diving around the islands that are near the lagoon.

Also called Kadacaaman, meaning stream of reeds, the paintings and vestiges found in San Ignacio suggest that Cochimies Indians were the first inhabitants. The location was discovered in 1716 by the Italian Jesuit Father Francisco Maria Piccolo and founded in 1728 by the Mexican Jesuit Juan Bautista Luyando.

The existence of available water and oases allowed the establishment of human groups of hunters and gatherers who left traces of their existence in the caves and canyons.

Located 398 miles from Cabo San Lucas, approximately 7½ hours by car, or 175 miles from Guerrero Negro in the northern part of the peninsula.

San Ignacio enjoys a temperate climate generally all year round. From October to May, temperatures range between 80 and 95 degrees Fahrenheit. The weather is warmest during the months of June to September, with very hot and sunny days that reach up to 110 degrees Fahrenheit.

Located in front of the main town square, the construction of the temple began in the beginning of the 18th Century at the request and under the financing of the Society of Jesus. The work remained unfinished after the expulsion of the Jesuits (1767) and was taken over by the Dominican Juan Crisostomo Gómez.

[two_first] The mission was built with blocks of volcanic stone more than 45 inches thick, which has kept the structure nearly intact. The ornate façade is highlighted with bas-reliefs and niches containing sculptures of saints. In the interior stands a great altar of carved wood plated in gold and with seven oil paintings and a statue of San Ignacio de Loyola. It is a jewel of religious art from the 18th Century.
[/two_first][two_second]
[/two_second]

A replica is displayed of a small part of La Pintada Cave located in the Sierra de San Francisco in the Municipality of Mulege. There are also photographs illustrating the evangelizing work in the region.

Splendid sanctuary where the gray whale comes from February to March to mate and give birth.

Spectacular murals of primitive art with a magical-religious theme. There are human figures, groups of jaguars, reptiles, snakes with deer heads, and more. All painted in ocher, red and black. The archaeological sites have been listed by the National Institute of Anthropology and History (INAH). An authorized guide must accompany all visitors.

The Sierra de San Francisco hold the largest number of cave paintings on the Baja California peninsula. In fact, the paintings represent one of the most important groups in Mexico due to the size, quality of the paintings, variety, colors and the extraordinary state of preservation. Some of these sites have been explored in recent times and several of them can be visited today, such as Las Flechas and Boca de San Julio.

[two_first]
[/two_first][two_second] The group of cave paintings located in the El Vizcaíno Reserve is associated with nomadic groups that inhabited the region until the Spanish colonization in the 18th Century and whose subsistence was based on hunting, gathering and fishing. According to the dates obtained in deposits found on the rocky coasts, the paintings cover a wide period of time ranging from at least 1100 BC to 1300 AC.
[/two_second]

The groups complex models of economic and social organization, as well as elaborate their rituals, are expressed in the paintings. The paintings were surely intended to represent the same hunting and fishing rites of passage that others aimed at promoting. That is why these paintings include a remarkable variety of motifs, both symbolic and naturalistic, and include humans and animals of different species such as deer, pumas, whales, fish and eagles.