Baja California Sur is a privileged land of contrasting and immeasurable beauty. It is also a land that was conquered in 1697 by the cross and not the sword. Loreto is guarded by Sierra de la Giganta and was the first settlement that prospered. His name was given by Father Juan Maria de Salvatierra, founding the mission known as the “Head and mother of the Missions of Upper and Lower California.”

Sierra de la Giganta, a mountain range notable for peaks that stretch to the sky and achieve a unique combination of beauty. The imposing valleys and rugged profile give it the appearance of a giant guarding all of Sudcalifornia. The Sierra is a body of mountains that make up the beautiful mountain range that covers the central part of our state. It runs along the coast and, at its southern end, the extremely high slope gives it a majestic appearance.

The paths interwoven into the mountains still preserve the traces of those who, centuries back, founded the missions, ranches and villages. Visiting the mountains today is as fascinating as it was in the 1930s when Lautaro Martinez began the route from the port of La Paz.

“At dawn, Lautaro and other expeditionaries arrive at a pier in La Paz. They wait on board a panga for an hour to be transferred to the canal where the sailboat owned by Wenceslao Villanueva is anchored. At beginning, the boat is to set sail for the Port of San Evaristo, very near San Jose Island. 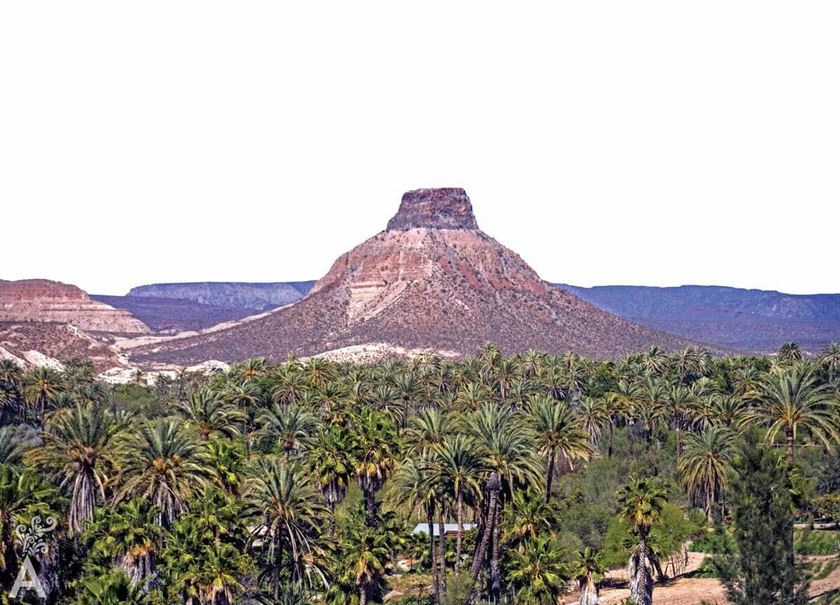 The sailboat glides smoothly over the calm, crystalline waters of the Gulf of California to cross the bay of La Paz. The passengers listen to the bell that sounds from the lighthouse announcing the departure of the ship, to which the sharp siren of the sailboat responds. On reaching the mouth, they can see the white line of the coast left behind in the distance, where black spots that form the colonies of vultures on the palm trees can be seen.

After several hours of sailing they see the Port of San Evaristo and, once again in a panga, land on the beach. The explorers and ranchero guides mount mules and begin the journey through the mountains. It takes two days to arrive at the ranches of La Soledad and El Bosque. They climb steep paths that seem to have no end while stones dislodged by the caravan along the way clatter down the canyon depths. 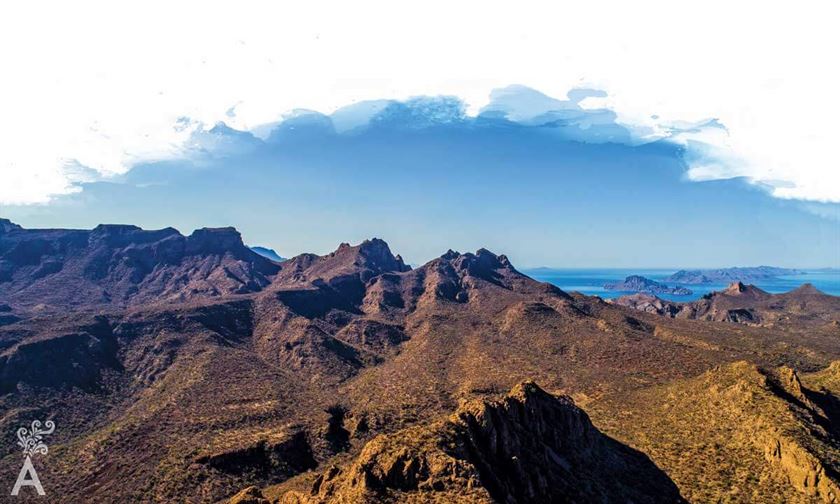 In these latitudes, the travellers have the unique and wonderful opportunity to run into the king of the mountain: the bighorn sheep. Flocks of sheep run uphill with the agility that only comes from absolute control at extreme heights. The men contemplate the majesty of the dominant male that observes them from a crag. His thick, spiral horns give him a superb appearance. The females protect the young by surrounding them and rushing them towards the edge of the sierra.

The riders and beasts stop to rest on a plain and enjoy a ranch meal where the main ingredient is the flour tortilla. After the “machaca” dried meat, coffee and “guayabate” guava sweets, they continue to climb the mountains where each crack in the rocks offers the desert vegetation a chance to live. They follow the path surrounded by the impressive landscapes, canyons sprinkled with red stones, groves of white trees, chollas cactus with challenging thorns, Cardone thistles of imposing height with exquisite blooms, and where “juancitos” (ground squirrels) and lizards scamper up and down the steep terrain. 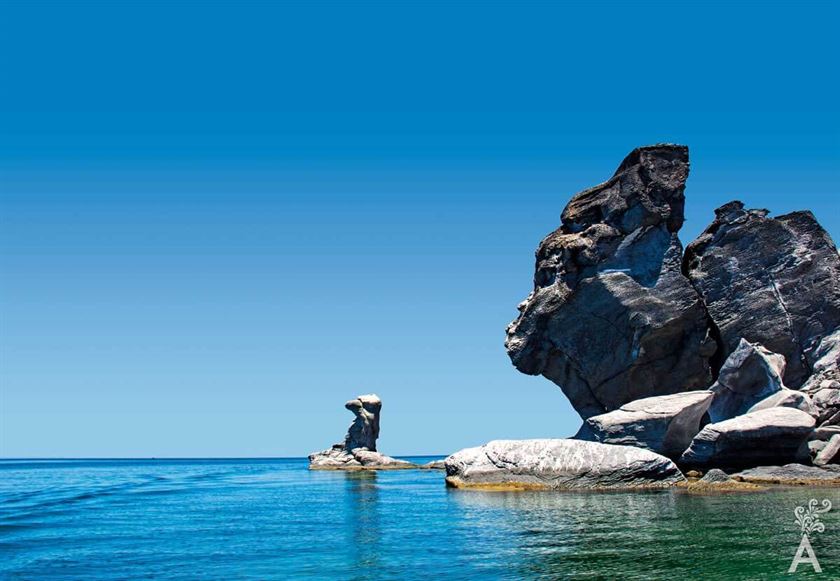 At dusk, they arrive at a plateau where they protect themselves under a great stone ledge to spend the night. During the dark hours they experience the feeling of being part of the mountain. The murmurs and movements of the mountaineers seem to form choirs under the brilliance of the stars that feel within reach. The Milky Way looks like a cloak of celestial lace in the deep blue of the sky, emanating a spirit of peace.

The sunrise in the Sierra de la Giganta provides a spectacle that stays forever in their memories. The sun throws its rays through the high ridges of the East side while, to the West, the sharp sculpted mountain peaks are wrapped in a magical glow of pink, violet, magenta and mauve. In a final burst of orange, gold and vermilion, the new day is shattered and the sun appears in the midst dominating everything.

In the cool breeze of the morning, they continue along a path covered with round stones. At last, they see El Pilon Hill. After rounding a gentle hill, they are received by the discordant barking of a pack of dogs, obliging them to enter the ranch at a trot. 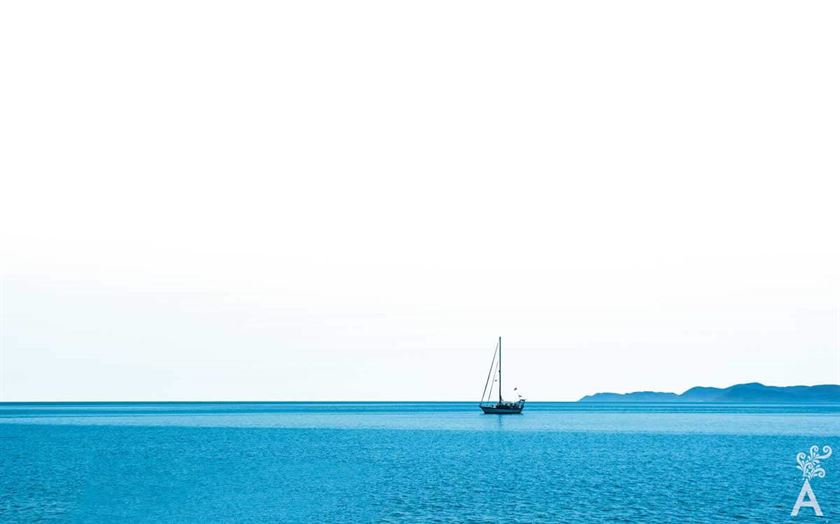 They admire the ancestral house on the wide plateau. With great dignity the home challenges time itself and seems to say, “here I remain.” The structure has thick walls of raw adobe plastered with lime, a high roof of palm fronds, wooden doors of cardon thistle, floors made of stone slabs, and corridors with palm roofs on all four sides supported by strong wooden beams. The house is located near the bed of a stream that originates in the mountains above. The property is surrounded by a low fence made of round stones that are placed with great precision one on another. It is a skill indigenous to the highlands.

An orchard is reached by crossing the canyon floor and climbing ancient steps formed by slabs of colored stones. Behind the fence wall is a dam that holds back the water coming from the spring originating uphill. This paradise has been in existence since 1842 when the ancestors of those who live here, built it. 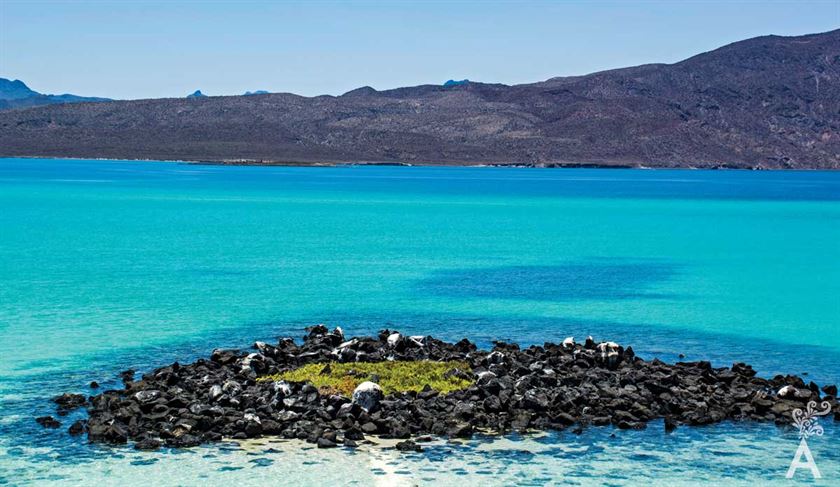 After being comforted with fruit and pleasant conversation, Lautaro and those accompanying him are given guidance on the paths they must take to reach other ranches that precede the impressive missions scattered throughout the sierra.

Before leaving, they can taste one of the dishes prepared by generation after generation of sierra women: “sipaiz.” It is a recipe that is surely taken from the mission kitchens. The preparation is similar to the process for making lasagna. The sipaiz is cooked on a burner. At the same time, embers are put on top to make it brown. The travelers will spend a couple of days with mountain families in the ranches of La Soledad and El Bosque enjoying their unique hospitality. They then continue the journey that is just beginning along the route of the mountain range. Would you join us?

A moment of togetherness with the family: El Triunfo Previous
Live the Experience Next

For years, the unique environment of the Baja California peninsula has been an inspiration for those who visit. In fact, it was the exotic beauty of this desert between two seas that led to its conquest centuries ago by pirates, missionaries and explorers, including the first settlers, the Guaycuras, Pericues and Cochimies Indians who adapted to the weather. All were determined, visionary adventurers who forged the story of Baja California Sur.

What is it that makes Pícaro Garden Cuisine so special?

Changing the world, one child at a time

A road trip through the countryside of Miraflores