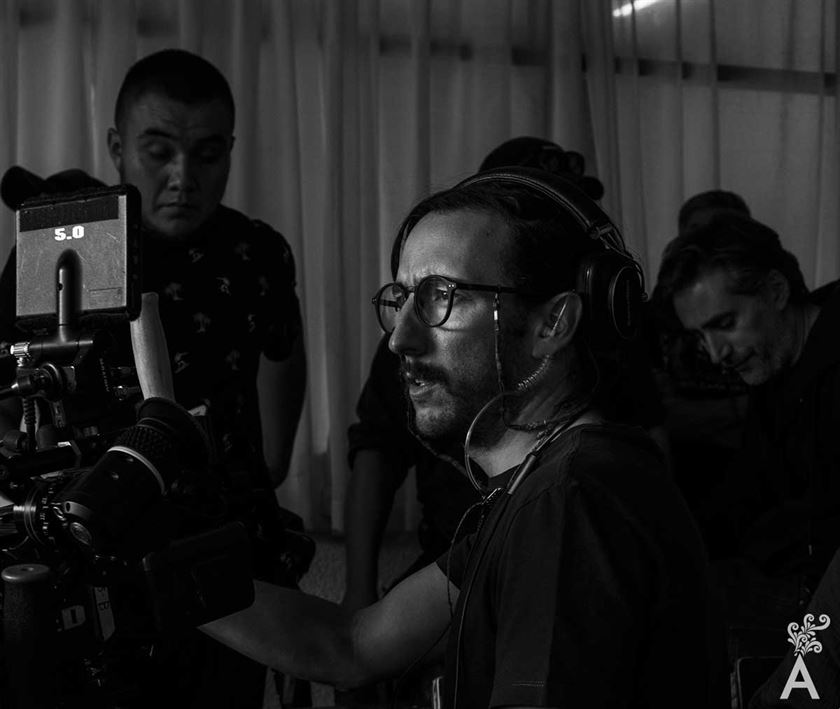 “I try to make sure my films have an artistic point of view, but at the same time, make concessions so the public wants to see them. I have been lucky to have my films entered in festivals and also to have them widely distributed.”

Since childhood, Beto Hinojosa has found a more comfortable world in movies. After making several commercials during his adolescence, his first contact with the technical part of cinema came at the age of 19 when he worked as an assistant to several directors. Whether it was luck or destiny, being surrounded by the movie making environment made him decide ne needed to study cinema.

What is the biggest challenge for a film director in Mexico?

It is a craft that combines two very complex challenges. On the one hand, you have an artistic need to tell a story. You imagine it and something inside you generates an irrepressible impulse to do it. On the other hand, there is the financing.

You must have a business plan that works. The biggest challenge then becomes the ability to stick to your goals as an artist and to not disappoint when producing.

Another difficulty is getting your movie seen, because no one makes a movie to keep at home. The real challenge of a movie begins when you finish making it.

Why did you choose Baja California Sur for the filming of Camino a Marte and what did it mean for you to present it at the 2017 Film Festival?

I am in love with Baja California Sur. As soon as I met this place, I realized that the entire territory, the sea, desert, oasis, mountains, rivers, the entire geography is very cinematic. Everything is here including the best beaches, the best roads, the best views, and the gastronomy is very tasty.

I practically wrote Road to Mars for the Peninsula. The story was on my mind during every one of my trips. Presenting the film there is closing a circle.

I usually bring a script when I start filming, but it transforms as the filming progresses and Baja California Sur gave us a lot of gifts. Things that were not written, were added when finding locations.

Have you considered doing any other filming or a series in Baja California Sur?

Production companies have sought me out for advice and contacts. I have a couple of projects that, if they happen, are planned for this place. Baja can offer many geographies in one place, so you can rethink the locations. It is a wonderful multi-location!

Due to its location, the light is spectacular. The sunrises and sunsets last a little longer than in the rest of the republic. In my films, I always look for atmospheres where those moments of light generate something special. In Baja California Sur, I find it.

How does the Los Cabos International Film Festival compare to other festivals?

I personally identify with the festival because both the programming and the movie choices are the type of cinema that I consume. It is a cinema that excites me and that at the same time has important commercial goals. There are movies that do both, movies people want to watch.

The festival has films with an artistic point of view but are fulfilling and awaken something in the mind that delivers a message. I’m excited to find a place where there are more people like me!

Have you made any alliances or projects from the festival?

Yes, I remember several projects. I have strengthened many relationships with producer friends and director friends that I don’t usually see throughout the year due to schedules.

Festivals bring us together and, in some way, serves as incubators for new projects. Not necessarily projects exposed in that edition, but relationships and moments. I have attended festivals with other producers and we currently have joint projects.

What led you to venture into a television series?

Thanks to my films, I have been invited to participate in a series. It is very curious that filming allows you to approach other projects. This has been my career in television.

Somehow, I feel more comfortable making movies, because they are usually 100% my own project. In a TV series, I am like a sailor on a ship; I sail in the direction that someone else has already decided and I try to contribute from my perspective.

What is your impression of Baja California Sur as a tourist destination?

It is a place that has something for everyone. I really like sports, sailing, going to the beaches, and the islands. At least once a year, I go on a trip with my family.

I’m even zealous to the point where I say, “It’s my Baja, I know her better than anyone.” I feel calmer than in the rest of the country. It is a place where time runs differently and I find shades of another color.

I live where I live because of my work, but if I had to move somewhere I would go to Baja California Sur.

Now that we are back at work, I am filming the second season of Luis Miguel’s series. I finished a film just before the pandemic that I have spent all the time since editing. I hope to finish it so I can figure out what its future will be. I have several invitations for other films and projects.