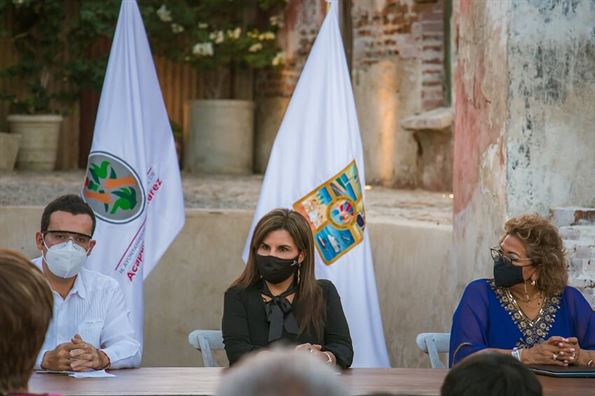 Under the direction of the mayor, C. Jesus Armida Castro Guzmán, Los Cabossigned the agreement between the “hermanamiento” to reactivate the country’s economy with the Comite de Ciudades Hermanas, which goal is to promote the exchange and cultural network between cities.

With mutual understanding and security, and above anything else, respect between municipalities, Los Cabos, Baja California Sur officiated the agreement with Ciudades Hermanas last Thursday, November fifth, in the historic compound Goncanseco, where Acapulco, Guerrero and Zacatecas, Zacatecas where present.

Ciudades Hermanas is an initiative to promote the touristic aspect of the participant cities and showcases educational and sustainable development. The committee apprehends national and international cities because it pretends to transcend frontiers so that other destinations in the world can join in the future.

These enriching experiences have developed new projects, such as the Tourist Route, which takes place in significant Mexican destinations, to promote economic development. In the early days, the municipalities were only beach destinations such as Acapulco, Guerrero; Playa del Carmen, Quintana Roo; Mazatlán, Sinaloa, Manzanillo, Colima, and of course, Los Cabos. But, because Mexico is a country full of wonders, the general view changed and added Cancun, Rosarito, Puerto Vallarta, Coatzacoalcos, Matamoros, Navojoa, Axapusco, Durando, and Zacatecas.

It is essential to say that to be able for these destinations to participate, it was necessary to have extensive security and safety measurements.

Last November fifth, the photographic exhibition took place at Jose Antonio Mijares plaza in San Jose del Cabo, which embodied all municipalities’ natural beauty, culture, and history. It is an open invitation for you to explore and visit other beautiful places in our country.

The unity between committed destinations generates strength and guarantees an incredible collective growth with strong pillars of solidarity and respect when we need to create consciousness.

Previous articleCinematic Location
Next articleBaja California Sur under the spotlight