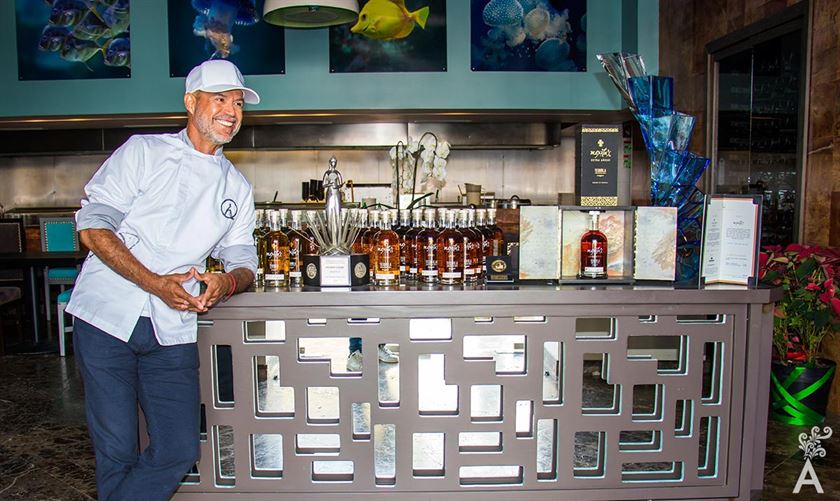 Angel Carbajal is the chef of Nick-San and has overseen the popular Japanese restaurant in Los Cabos since the beginning. The restaurant is about to celebrate its 25th anniversary! In this interview, Angel takes on a journey of his memories from his beginnings. He helps us understand the value and, at the same time, the secret of remaining one of the favorite restaurants for locals and visitors.

Everything began in 1982, when Angel decided to make a radical change in his life and moved to Los Cabos. It is when his personal history begins in this peninsula.

“Many people were involved in this achievement. If we go on a journey through time, it would begin when I graduated with an electrical engineering degree. Searching for a change, I first arrived in La Paz where my father lived.

Working with an uncle, we tried at our own business when we set up a hardware store. It did not go well! We had to leave merchandise in the valley and decided to load the truck with oranges. This was my first interaction in Los Cabos with hotels and restaurants that bought oranges by the kilos. Among them were Alfonso Fisher and Jorge Viaña who, at that time, were working for Cilantros.”

Angel fell in love with the sea and developed a passion for fishing and diving. For him, the sea was paradise. It represented freedom and adventure. Everything is possible on the high seas and, at the same time, nothing is certain. However, it reaffirmed that there is no bad day to go fishing. The views and the sunrise are, in themselves, gifts of life.

“When I was a waiter, a client invited me to take a snorkeling class. From that point on we became great friends. In fact, I ended up working as a snorkel guide. Later, I decided to get certified in diving. When you dive, you realize the enormous diversity of fish.

My first contact with sport fishing was through a friend, Dell. The adrenaline of being on the high seas alone, with sometimes three rods, was incredible. Sometimes I took home a lot, sometimes everything escaped. However, nature taught me the points where the bait will be taken and how to locate schools of dorado, tuna and marlin.”
[/two_first][two_second]
[/two_second]

At the same time Angel discovered his passion for fishing, he started working as a waiter and then a manager of the restaurant Mr. Sushi. He even served as an improvised chef when needed! It was then that he first met Nick who would become his partner and a great friend.

“Nick frequented the restaurant every time he traveled to the destination. On one occasion, he was having dinner with his wife and was shocked to see him behind the sushi bar greeting some friends who came to dinner. I appreciated his confidence and that the product was so fresh it inspired him to prepare sushi.”

“Nick’s first business proposal was to send seafood to Japan. With all due respect, I rejected the idea, not because it wouldn’t provide a good income, but because of the love I had for the sea. A year later, I told him about a new project in Plaza Bonita. Nick supported me with uniforms from one of his restaurants in New York and with the support of Chef Taka San, his right arm.”

Nick returned after two years, this time with plans in hand and a project that would transform the business career of Angel, as well as dining in Los Cabos.

“I remember working in La Terraza restaurant when Nick arrived. He presented me with plans from the architect Tsuno Tanaka. I decided to accept the challenge and involved my entire family. That included my father, Santiago Carbajal, my sister Carmen, and my brothers. We knew about electricity and plumbing and together we developed the project. It is important to note that we have great affection for each other.”

With seven tables, a bar with 24 chairs and a kitchen with a toaster, microwave, grill and stove, Nick-San opened in the center of Cabo San Lucas in 1994. The name in Spanish translates as “Señores Ángel y Nick.” The location became a favorite.

In time, customers demanded a bigger location and an expansion to Mexico City, Nuevo Vallarta, San Miguel de Allende and an alliance with the restaurant Mastro’s. The American company has a selection of Nick-San’s menu items in 18 restaurants.
[/two_second]

“It is very satisfying to have clients who can arrive by private plane just for dinner. That’s because only the best will do for them. We were the pioneers of sushi throughout Baja California. We are not in the habit of taking pictures of celebrities who visit the restaurant. However, I do have many memories.”

One interesting anecdote was during the filming of Troy in Los Cabos. A mysterious diner repeatedly visited the restaurant throughout the week. It turned out to be Orlando Bloom, whom Angel would later take fishing in his panga.

“Even though Orlando has not held a fishing pole before, he turned out to be a great fisherman! He cast the bait and the first thing he caught was nothing less than a marlin.”

After 25 years, Angel still accepts the challenge of constantly being creative in order to exceed the expectations of his guests. He works hard to be innovative instead of copying what is already in the market.

Nick-San is a restaurant where the main challenge is to present the diner with original recipes. Angel defines it as a cuisine with flavors of Mexico and Asian accents.

25 years ago, Angel believed it was Los Cabos that chose him to enter the gastronomic world. From the moment the first Nick-San opened in downtown Cabo San Lucas, he has maintained the restaurant’s reputation for excellence by using the freshest local ingredients and imported products from Japan.

“Over the course of 25 years, I have seen Los Cabos grow as a tourist destination. We have been part of that history and have watched the culinary transformation from the front row.”

Previous articleSuper women on the outside, super tired on the inside.
Next articleLa Roca: 45 years of culinary success