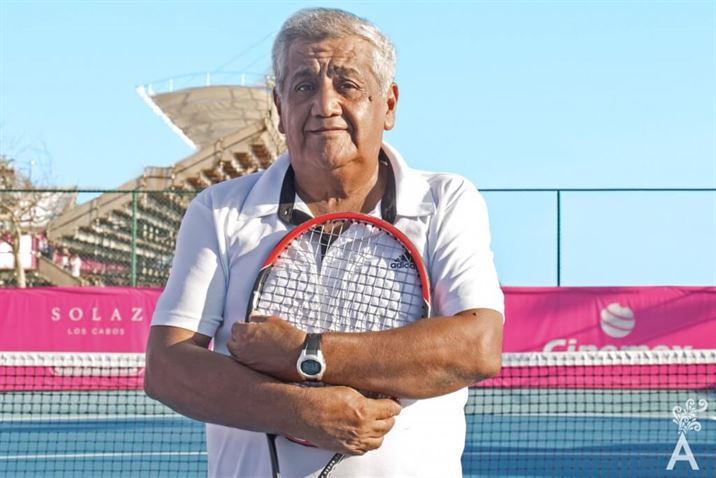 Nothing in life is free. That’s especially true for sports. The cost of becoming a professional is personal discipline and dedication. For Luis, the definition of discipline is to be attentive and focused on something you really want to achieve.

Luis arrived in La Paz in 1976 as a tennis instructor. After 40 years of living in Los Cabos, he has seen his home become an eminent tourist destination that has grown with a better quality of services.

Luis believes that four years old is the right age to begin learning tennis. It doesn’t matter if it’s for social purposes or if the ultimate goal is competition, the discipline that is required to play tennis will build character.

“The enthusiasm in the training is reflected in the achievements. Practice and time create character. This applies to everyday life. It is a source of pride for me to know that my students are professionals, not only in tennis, but in life.”

His work as a tennis coach is Luis’s greatest passion. The benefits professionals receive from his training make all the time in the sun worthwhile. Patience is also required to communicate and teach tennis techniques. His method with children is to learn through play.

“Life itself is what inspires me. Even at 63 years old, time on the tennis courts is something I enjoy. It is a gift from God. One must know how to instill the same passion for the sport in children.”

The spiritual aspect of sports acts as a pillar for all the other areas of his life: mental, emotional and physical. Everything he does is motivated by the spiritual pillar.

“I want be remembered as a responsible person who has shared his knowledge. It is no use to amass knowledge for oneself. One has to spread it like seeds with people you interact with.”

In 1994, Luis organized the First Professional and Amateur Tennis Tournament in Los Cabos with a purse of $1,000 pesos. In the following years, seven international tournaments were held with professional players ranked among the top 200 in the world.

The first Association of Tennis Professionals tournament was held in Los Cabos in 2016. It is considered an elite event and certainly puts the spotlight on the field of sports in Los Cabos. The ATP is an event that Luis dreamed would be held here at some point. When invited to perform the coin toss before the start of the semifinal match, he commented that one of the dreams on his list has now come true.

“As a coach, I’m a fan of good tennis. I like the mental game and the way Roger Federer plays. I think he is a stylish player who gives his best in every game.”

“One of my first students was Fabricio Gonzalez. He has developed a nice technique. He managed to enter the US academy where they recognized his potential. He is now a renowned architect. Andrea Garcia is another student who at age 12 was nationally recognized. Even though neither were dedicated to professional tennis, they became professionals.”

Welcome to our Life in Balance issue. We hope you enjoy the interviews with the influential people of Los Cabos who have made wellness their life’s work. All are recognized experts in the fields of fitness, nutrition and sports and they’re ready to share their valuable advice on the many different methods for getting and staying healthy.