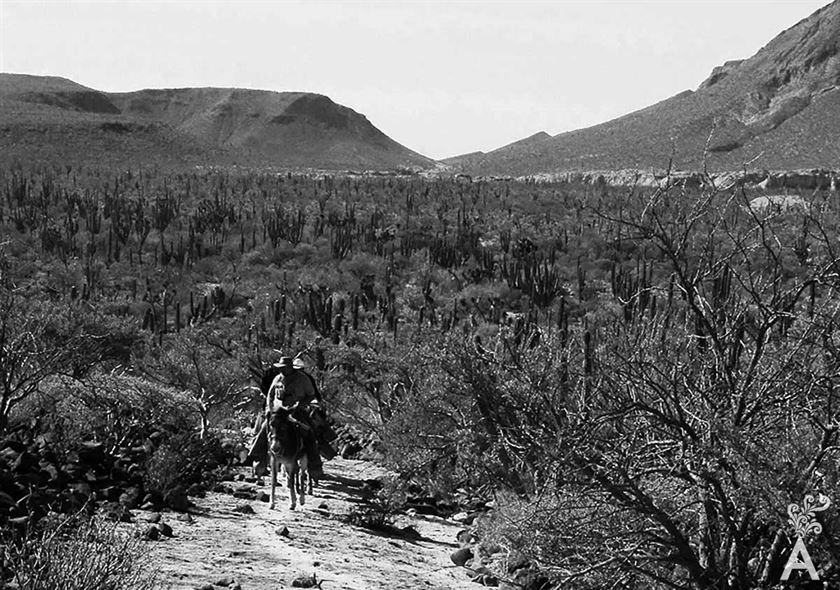 Well before humans entered what we now know as the Californias there were trails made by animals necessarily searching for water. The first explorers of this land in prehistoric times found maps drawn upon the land by the species that lived there. As a result of deciphering and following these maps they were able to concatenate the oases and streams along its entire length.

[two_first]
[/two_first][two_second] These sources of water would make it possible to live there permanently.   Another result of these explorations was finding direct, easy and safe routes between these strategic locations. Water was, from that first moment, a necessary and defining factor in the cultural evolution of the human groups that occupied the region.

As these groups settled along what is now the Peninsula of Baja California in Mexico and the American State of California the contact between them made by the footprints of countless generations made the trail deeper and wider… more defined and permanent. The traffic along this artery would progressively grow as a result of commerce, family ties and territorial conflicts.
[/two_second]

By the time the Spanish contact occurred on the Peninsula this trail was well known and traveled by the California natives. After various failed attempts at colonization they were able to establish a permanent base of the Spanish Crown in Loreto. The first mission and Royal Presidio were established to follow the ancient trail trekked between the oases. The motivation behind this effort did not only lie in the evangelization of the native cultures, there were also pressing geopolitical motives for Spain.

[two_first] California was only nominally Spanish without a military presence or permanent settlements. Commerce between the Orient and New Spain was being threatened by English pirates that attacked the Manila galleons and Russia was moving in from the North with the purpose of conquest. The well-traveled trail was widened and modernized to allow the passage of pack animals and the steepest sections were improved by building retaining walls and switchbacks to facilitate ascent and descent.
[/two_first][two_second]
[/two_second]

This coming and going along the ancient trail gave way to the Camino Real of the Californias that finally united the chain of missions and presidios so sought and necessary for the Spanish Crown. As it turns out, today the main route of communication in this region follows the original route laid down in prehistory. It continues to be a cultural current between people and nations.