Bob Bisbee, from a dream to a legacy 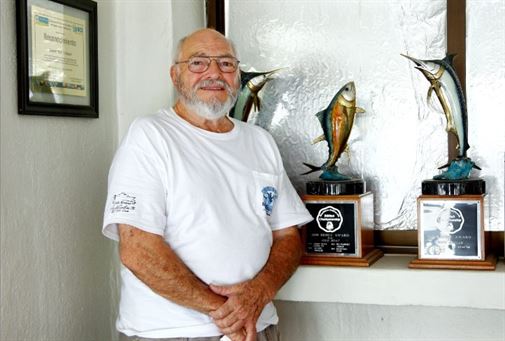 Thanks to the significant growth and international expansion achieved by Bisbee’s Black and Blue Marlin Tournament, Los Cabos is known as a remarkable place for sport fishing. The number of fishermen who come from around the world has markedly increased and television networks train their cameras on this paradise during the month of October every year.

Bob Bisbee visited Cabo in the 60’s. Close friends brought him here in private jets. With the opening of the Trans-peninsular Highway in 1973, he started driving his car to Cabo.

In 1982, Bob was chatting with friends who were also passionate about the world of fishing, including a pioneer in the hospitality industry in Baja California Sur, Don Luis Coppola. It was then the idea of small sport fishing tournaments became a reality. Bob sold his fuel company and fishing store and moved from Newport Beach, California, to the southern tip of our state.

The first fishing tournament in the region was organized in the month of May and included Bob’s boat, with his son Wayne as the captain, and just five other boats. Bob promoted the tournaments and invited fishermen and boats to participate. A tournament the following December already had the participation of 27 boats. By May and December of 1983, there were more and more participants. The tournaments were fun and prizes have now reached as high as a million.

The construction of the Cabo San Lucas marina in 1987 signaled the arrival of a large number of boats and the tournaments became famous along our coasts and abroad.

Bob Bisbee decided to retire in 1990. However, the tournament continued and Bob’s children, Wayne and Patricia, have been in charge since 1995. Mr. Bisbee passed away on June 14th, 2018.

The fame that has followed Bisbee’s Black & Blue Marlin Tournament over 40 years has spread. Today, there are two tournaments, Bisbee’s East Cape Offshore Tournament in Buenavista and the Los Cabos Offshore Tournament, known as “Little Bisbee’s. The smaller tournament features a social environment for meeting other passionate fishermen and sharing stories. It takes place a few days before the traditional tournament.