COMONDU, between oases and the Pacific Ocean 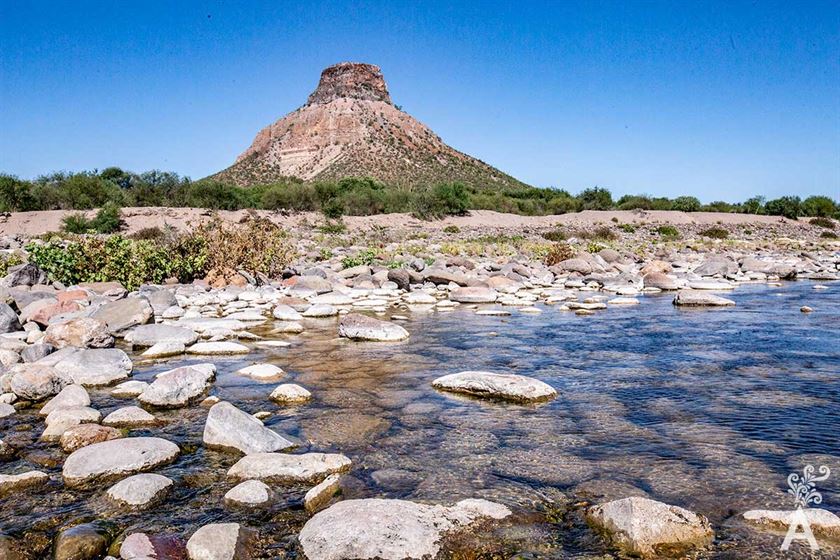 The central region of Baja California Sur was the location of the first missions in the Californias. It is where the Jesuits settled and established the foundation for the colonization of Antigua California, the mother of the three current Californias.

When the missions started to close down at the beginning of the 19th century, the people living nearby began to establish Mission Towns. These communities survived the desert environment because the missions were purposely located in extraordinary and beautiful oases on the sides of the Sierra la Giganta mountains.

Comondu has three different surroundings: Sierra La Giganta, bordered by oases; Valle de Santo Domingo, a farming area where most of the population is located; and, the marine coast, with the vast sea life of the Pacific Ocean. Each of these three locations has unique characteristics.

An oasis is “a place with plant life and natural springs, but also a haven, a truce, a rest and refuge from the hardships and setbacks of life.” Moguel, P. en Evocando al edén. Cariño, M; Breceda, A; Castorena, L. (2013)

The Baja California Peninsula has 184 oases, 171 of them located in the south and most of them on the edges of the Sierra La Giganta mountains. Travelers that explore the peninsula experience the magnificent presence of the Californian desert with extensive cactus species such as chollas and pitahayas, as well as mesquite trees, and a variety of desert shrubs. In a desert region, such as the central part of the State, the presence of an oasis makes a big difference.

This part of Comondu has scattered oasis towns and ranches that exist in another extraordinary dimension. Time goes by a little differently here. Some are the oldest towns of the State, such as San Jose de Comondu, San Miguel de Comondu, La Purisima and San Luis Gonzaga, and small communities such as Paso Hondo, San Isidro, San Jose de Guajademi.

These settlements located in south Californian oases are inhabited by descendants of the oldest Californian people that were not indigenous. Their lifestyle still reflects other times. The towns are welcoming, cheerful, friendly, and respectful and visitors are immediately attracted to this dynamic.

The feeling of going back in time is inevitable when you visit these towns. There is a peacefulness in the everyday activities, the appearance of the streets and buildings, and the traditions of the people. Even the cuisine is almost the same as it was before. At any given time, the peaceful sounds of the environment inspire a spiritual approach to nature.

The Margarita and Magdalena islands are part of Bahia Almejas and Magdalena and contribute to the more than 340 miles of coastline.

Fish and shellfish are plentiful here. Some of the menu options at the traditional restaurants and ‘palapas’ in the towns of Isla Magdalena, Puerto San Carlos, Puerto Adolfo Mateos and San Juanico are lobster, shrimp, oysters, octopus, clams, blood clams ‘patas de mula,’ scallops and more. Lobster and shrimp are the best in the fall and winter seasons and are delicious additions to the fresh ingredients of the traditional cuisine.

The main attraction of Bahia Magdalena are the gray whales. These magnificent creatures arrive from December through March and navigate to three different lagoons to mate and give birth. Residents of Puerto San Carlos and Puerto Adolfo Lopez Mateos have been organizing whale watching tours for many years. It is also common to see other marine animals on the tours such as dolphins and sea lions.

Up north, there are estuaries covered in mangroves where kayakers can explore miles of uncharted coastline and experience a magical connection with nature. In Puerto Lopez Mateos, the enormous array of white, smooth sand dunes on Magdalena Island is the ideal location for meditating and relaxing. Continuing north on the coastline are two fishing communities named La Poza Grande and Las Barrancas. Both are almost exclusively inhabited by hard working, friendly fishing families.

San Juanico is small fishing community that has caught the attention of the tourism industry over the years. People come to this remote town to surf in Scorpion Bay. There are ideal areas for beginners to learn the sport without risk, as well as others where professionals can enjoy the swells in all their glory. The waves are known for being the longest in the world and surfers from the United States, Australia, Italy, Japan, and other countries come here to see if that’s true.

Sport fishing is another attraction. Many species swim these waters, including Mahi-Mahi, mackerel, yellow and bluefin tuna and sailfish, as well as deep-sea species like Mako sharks, groupers, and seabass. Other locations such as Bocanas de Cadeje and San Raymundo are perfect for recreational fun and spearfishing.

Most of the population of Comondu lives in farming cities and towns, specifically in the Valle of Santo Domingo. The huge plains that flow from the mountains to the coast, named “Llanos de Magdalena,” were practically deserted until the early 1940s when people from all over Mexico were encouraged to settle here. Travel expenses and financial support for the development of agricultural opportunities were provided to the pioneering families.

Many farming communities originated here. Among them are Ciudad Constitucion, Villa Ignacio Zaragoza and Villa Morelos, all on Highway #1. More than 500,000 hectares of land are suitable for agriculture. Water for irrigation is extracted from wells. The population has diverse origins from mainland Mexico. That’s why the gastronomy of this region is more varied than the rest of the country. There is shredded beef and fish such as manta ray and marlin, shellfish and fish meatballs, goat milk, meat empanadas, traditional Mexican food (pozole, menudo, grilled meats and appetizers), and local cheeses, sweets and preserves.

Previous articleAdventure between the desert and the sea
Next articleBeyond Los Cabos, discover the beauty of Santiago