Come back with a fish or a suntan 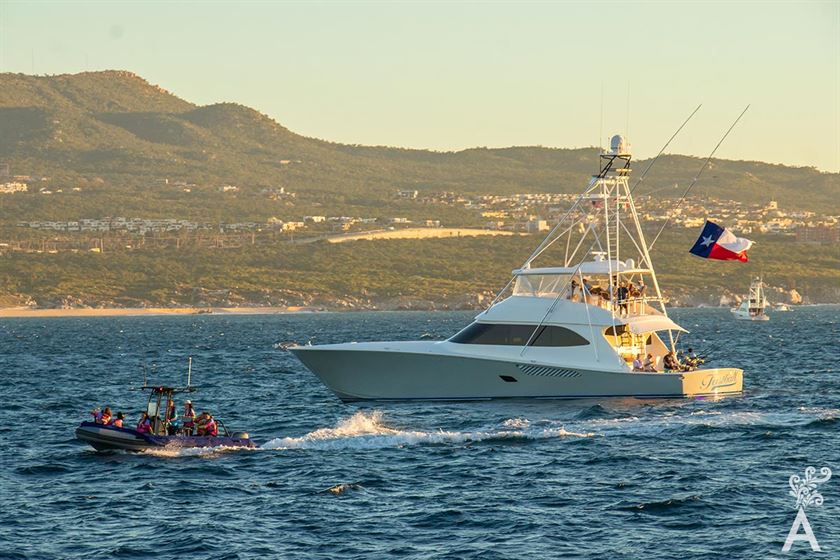 The coast of Baja California Sur is famous for its abundant species of fish. There’s everything from marlin, tuna, and sailfish to the smaller snapper and skipjack. Of course, there are also the famous Bisbee’s Black & Blue Tournament.

These tournaments can be costly to enter, and it’s not as easy as rowing a boat out on a lake. In addition to the entrance fees, you must bring your own sturdy boat or rent one. On top of that, there’s the fuel and, of course, the fishing equipment. So why do so many anglers come again and again to enter one of the many tournaments. Is it just for the glory of winning?

Interviewing Donald Whittier, whose Wahoo Loco Sport Fishing team has won a cash prize in seven of the last nine Bisbee’s East Cape tuna division tournaments, taught us much about the excitement of sport fishing.

“I fish because I love being on the water. The whole process brings me closer to nature. I love the connection of man to the fishing pole, line, ocean and the fish. The ability to see cradle to grave is very real and satisfying. As one saying goes, many people spend their lives fishing not realizing that it’s not the fish they are going after.”

Wahoo Loco returned this year to win the tuna jackpot for the second time. The team is well on its way to joining the “Million Club.” Members have won more than $1 million in prize money. The team focuses on tuna and dorado and has done very well in these categories winning the Bisbee’s East Cape tournament tuna division twice. No other fishing team has accomplished that feat.

“On one hand, participating in this festival is about the money. On the other hand, it’s about competing. The two previous years, I did not enter the East Cape tournament because there were very few tunas around. I didn’t like the odds. Over the past nine years, I’ve competed in the Bisbee’s East Cape tournament seven times and have walked away with a winning check seven times. The high success rate is due to my team’s strategies and focus, among other things.”

“Absolutely, having modern technology to mark fish is important! What you’re marking is more about the bait or fish that the larger fish are eating.

Using technology allows you to find a bait ball or ball shaped swarm of fish that small fish make when threatened by larger predators.

You mark it on the fish-finder GPS and keep coming back over the area because you know there are probably big fish nearby that have caused the smaller fish to swarm into a ball. Also, local experts make all the difference. They know the tried and true spots. From there, you can use technology to be right where you need to be once you’re on the fish. However, it’s so much more than just finding the fish. Knowing how to hook them, fight them, and boat them, is an art form.

There are guys here who fish 340 days a year. That is solid, professional experience. You may own a million-dollar boat and fish a few weeks out of the year, but it doesn’t make you as good as a guy who wakes up every morning and makes his living doing it.”

“The Los Cabos tuna jackpot has become a hell of a lot more competitive.  When we started, there were less than 100 teams. Now it’s pushing 150. That makes a huge difference in being able to win a tournament, especially with all the boats going after the same type of fish. It helps that there are Dorado and Wahoo divisions, as well.”

“Absolutely not. All you must do is consider the tonnage the commercial tuna boats bring in versus the handful of fish that each sport vessel takes from the ocean. There’s no comparison. But species always need to be regulated because fish numbers are affected by many factors. Los Cabos is not like other parts of the world. Keeping tabs on fish numbers is extremely important in protecting our different species.

However, sport fishermen do not catch enough fish to impact fish numbers. It is also worth noting that sport fishing boats have a regulated daily limit. If the boats follow the limits and regulations, which everyone I know does, then sports fishing is a drop in the ocean compared to commercial fishing boats.”

Sport fishing in Los Cabos is big business. It’s more than the 10 or so tournaments held here each year. Everyday, boats of all sizes, from single engine pangas to 150 ft. luxury yachts, set sail into the Sea of Cortez and the coastal Pacific Ocean. There are excited fishermen aboard from first time beginners to experienced anglers.

All dream of hooking the big one.

With the abundant fish in the area, you’re almost guaranteed to catch something!

Previous articleEsperanza, has the name of a Woman
Next articleFrom the desk of Laura G. Bueno