Fantastic Women remind us what it means to be a woman 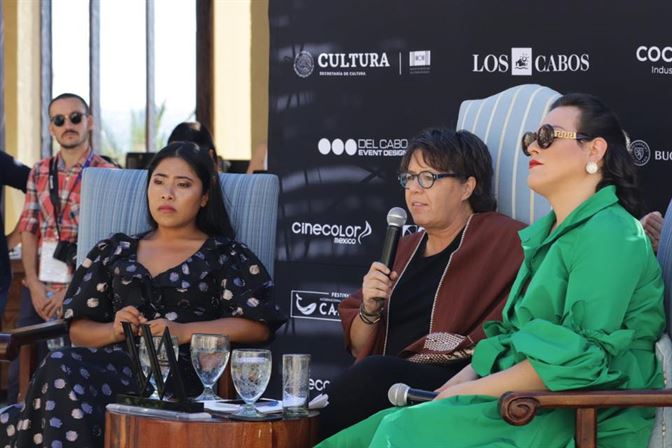 When you receive the opportunity of being close to Yalitza Aparicio, it invades you—or at least it invaded me— that feeling of admiration for having in front someone who has a voice in the struggle of indigenous communities in Mexico, but, also, for the role that women play in society.

The elegance of Yalitza, her confidence in speaking and her understanding of the issues that concern women only confirmed the esteem so many have for her.

Accompanying her was the journalist and, at that time, moderator, Gabriela Warkentin, and next to her was Daniela Vega, actress and transsexual, who reminded us about the diversity in the world.

Here, one of the central axes of the talk arouse. Why don’t we accept diversity? And in that same speech, they tried to answer with a simple point of view. “Every human being must be free to choose the life she or he wants to lead. No ties, no social stigmas, no fear of being judged” said Yalitza.

Women’s lives have been perpetuated for many years. We have been violated by stereotypes or machismos. But in that talk, which took place at the Waldorf Astoria at Pedregal, these two great human beings reminded us that we should break this way of living and assume the positions we want starting with:

What does it mean to be a woman?

Yalitza says that woman is not the one who conceives, or that her only goal is to be a wife or have a family. Being a woman goes beyond that, being a woman means choosing the role you want to develop. Where you want to work, a decision power to choose if being a professional is your path, or what role you want to play in society.

Los Cabos International Film Festival opened this space of Fantastic Women, and the dialogue of Yalitza and Daniela touched on sensitive but pertinent topics. How do we stand out? How do we narrate our identities? How do we achieve those necessary paths of transformation? How do we recognize again the roles that have already existed for centuries, but that has been a shadow to take away power?

The two women finished the incredible talk by reminding that change is necessary, that change is here. And if society still does not accept it, let us take by assault what we are denied, so that in the future — hopefully not too far — the next generations will live in a more liberal world.

Oh, Baja there’s so much more to explore 🗺️