A journey on the Sea of Cortez (Gulf of California) 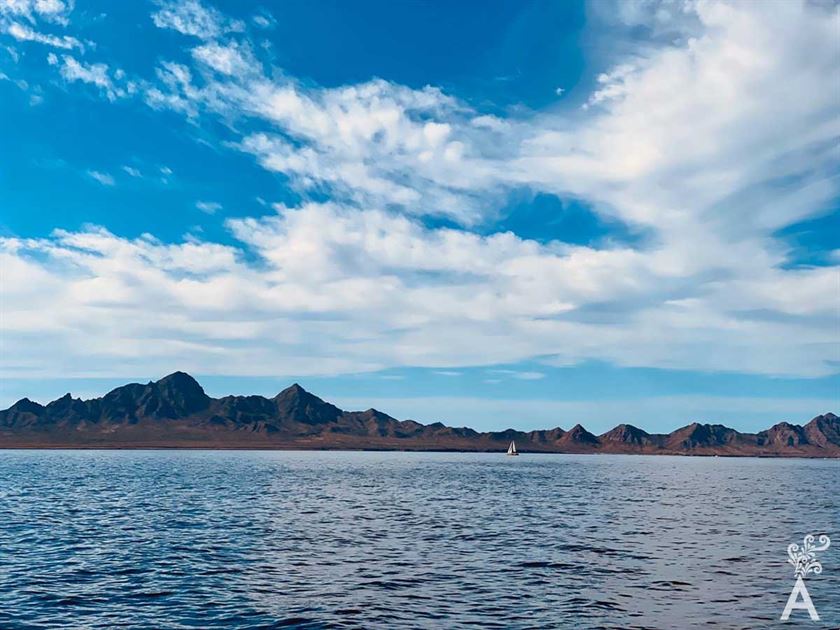 I have always been very attracted to the sea. The marine surface launches waves emit a peaceful sound and shows us the edge of infinity that we call the horizon. Science has proven that seeing the horizon stimulates the prefrontal cortex, an area of ​​the brain responsible for our emotions and personal reflection.

A good part of me occasionally needs to take a deep breath and immerse myself in this saline element that gave birth to all the life we ​​know. However, I have never had the opportunity to navigate and live for a long period of time in the marine confines of the Sea of Cortez and Sierra de La Giganta. 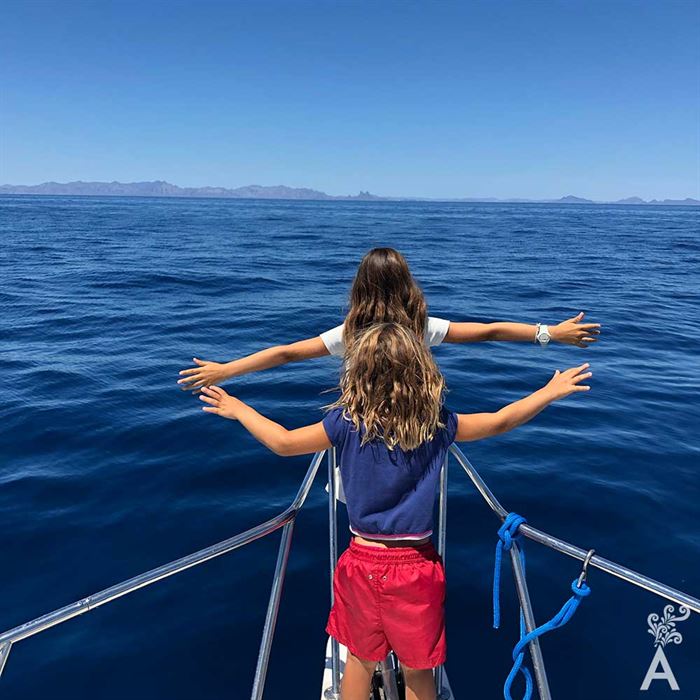 Given the unknown and uncertain circumstances we are faced with, I decided to undertake a three-week trip to Isla Espiritu Santo in March with my family. Three weeks suddenly turned into three months; 97 days to be exact. To our own amazement, we traveled across the Sea of ​​Cortez to San Carlos, Sonora!

In the beautiful city of La Paz, also known as the “port of illusion,” we had a 1973 Silverton model boat that my husband had been remodeling for almost five years. The original owners gave it the name Rajama. We renamed our beloved ship Moli, for our daughters Momo and Lila.

Anyone who has ever built a boat knows that the path is never linear and not honey on crackers. The world of boats is complex, especially if you decide to raise it from the rubble and ashes like a phoenix and restore it. The boats that keep innumerable secrets in their innards, reveal themselves to you through the peaceful virtue of patience. The truth is, I now understand that those five years of rebuilding Rajama to turn it into Moli prepared us in many ways for this great journey. 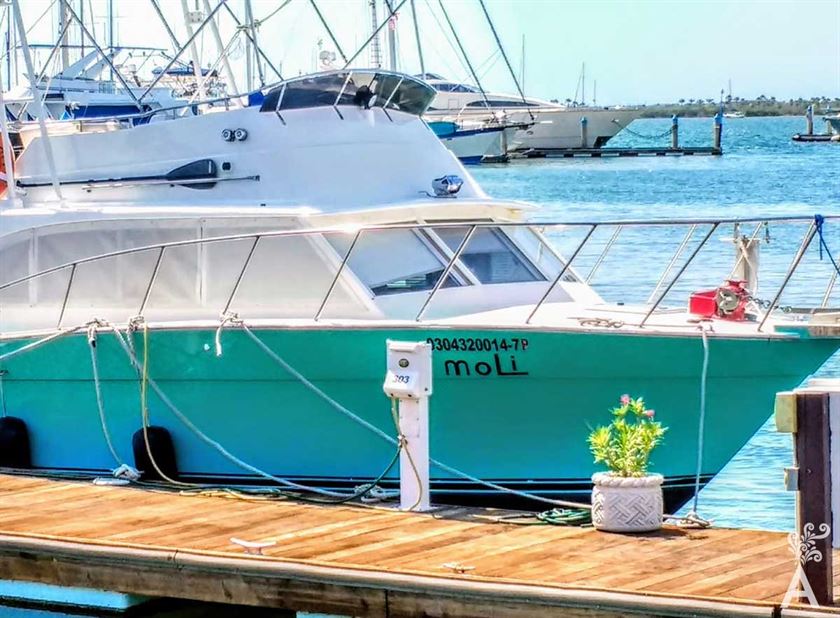 On March 23, we set sail from the port of illusion and anchored at Isla Espiritu Santo in the bay of San Gabriel. When we arrived, it was still daylight and we decided to cook a pasta soup using sea water, since our calculations told us we had to save as much fresh water as possible. Moli’s freshwater storage capacity is about 50 gallons, which is equivalent to four gallons per person for three weeks. That does not count the drinking water we carry in jugs. We calculated two jugs per week among the crew of four.

That same night, we realized that there was a lot of bioluminescence in the sea. Bioluminescence is pure magic. It is as if the world suddenly tipped, the sky went into the sea and all the stars in the sky were within our reach by simply stretching our arms. Bioluminescence is a process that occurs in living organisms when energy generates a chemical reaction that manifests itself as light. It has several functions, including defense, communication, reproduction and attraction of prey. There are many light-emitting organisms including bacteria, fungi, insects, crustaceans, mollusks, and fish.

My daughters Momo and Lilia swear that we saw mermaids that night. Truth is, we could never identify the fish that approached our boat. I came to think of sea lions as large fish. We opted to dream that what we saw that night were phosphorescent green sirens. 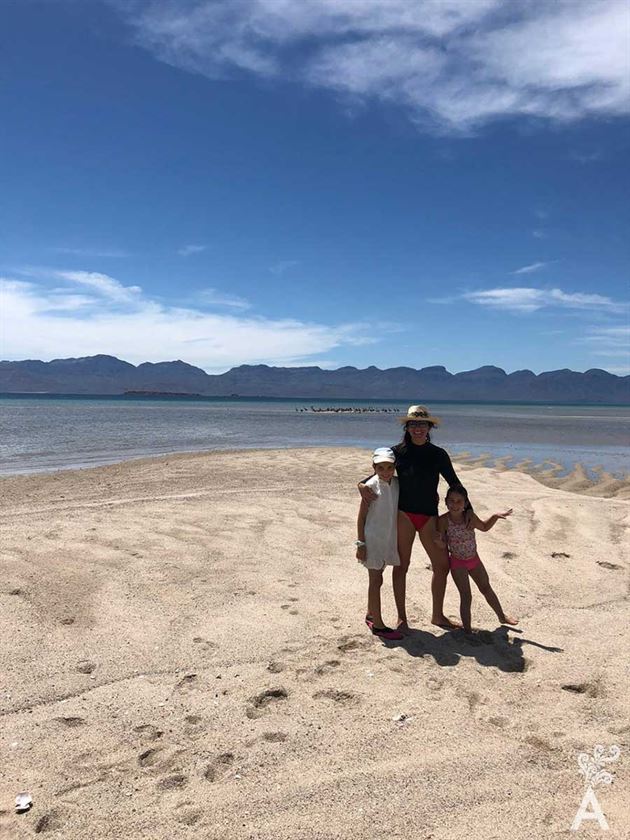 In La Gallina Bay, we spent our days swimming among the turquoise blue and silver stars of marine bioluminescence, orange sunsets and the occasional wasp. Our friend Steven Wheeler and his wife Nash caught up with us in this bay aboard their trimaran “Solecito.”

We continued our journey to San Francisquito Island located a little more than 45 miles north of La Paz. The beautiful island is perfect for swimming, snorkeling, and climbing the rocky limestone mountain where one can appreciate the majestic view of the islands San Jose and El Pardito.

At San Francisquito, we noticed that all three of the ship’s batteries were corroded and the engine alternator and generator were not charging properly. This meant that at any moment we could run out of light. It also raised the possibility of not being able to start the engines.

We made the decision to navigate to San Evaristo, a fishing community located 10 nautical miles from San Francisquito. We hoped to find Lupillo, a well-known mechanic who would help us so that we would not have to return to La Paz and restart our journey.

Saint Evaristo completely changed the course of our destiny. We were able to fix all our mechanical setbacks and resupply ourselves with provisions such as milk, cereal, potatoes, pasta, canned vegetables, apples, oranges, tortillas, cheese, coffee, cookies, and drinking water.

Although the coronavirus kept us uneasy, the winds and the Coromuel were blowing in our favor. It was an invitation to challenge our own limits and to reaffirm that what we knew until now of the Sea of Cortez and its inner secrets was only an aperitif, the prelude to a majestic, imposing and solemn journey that would transform us forever.