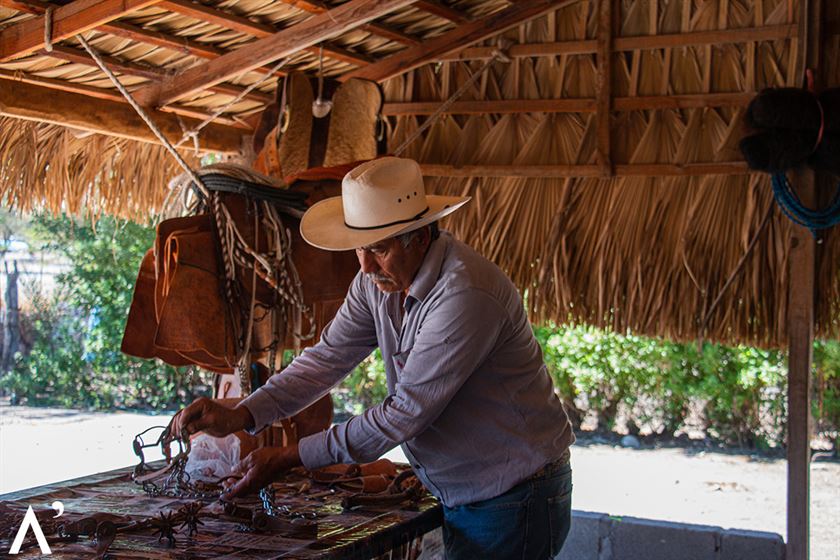 San Luis Gonzaga is in the municipality of Comondu, it has two accesses, both on the way to Ciudad Constitucion from La Paz, one at 128km and the other at 195km, which are a fascinating adventure due to the ruggedness of the trail.

After taking the 195km access and close to an hour drive, suddenly an oasis is observed that we perceive as a sign of a nearby town. Upon arrival we find the church with few houses around it. About 16 families live in the village. When we knocked on the door of the house that was right in front of the church and next to the famous Company Store, Mrs. Rita Márquez greeted us with a smile.

She told us that her parents were born in San Luis Gonzaga, her father was Jose Marquez Obregon and her mother was Maria Romero Higuera. She told us that all celebrations such as weddings, first communions and “quinceañeras” try to be celebrated on the day of the town’s patron saint. They have a tradition of processions on horseback. The traditional food is “oven of the sierra”, which consists of meat prepared with spices that are placed in a pot and then buried and covered with embers and hot stones. 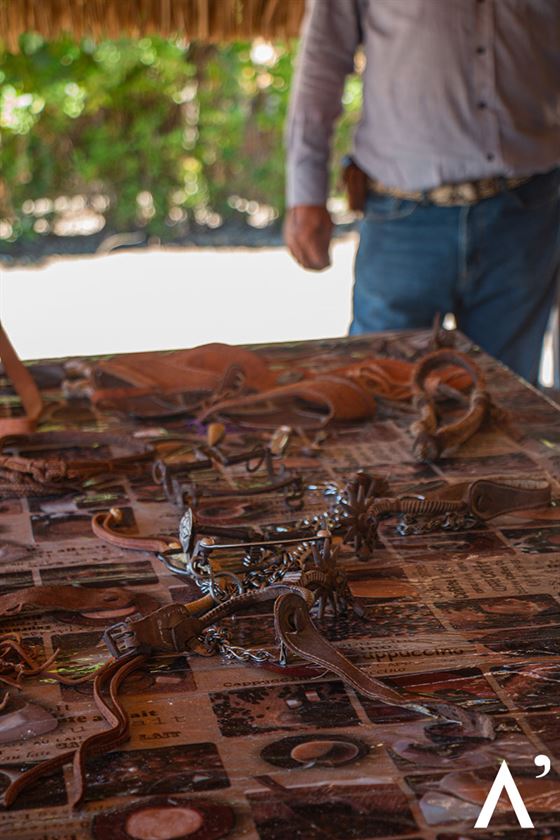 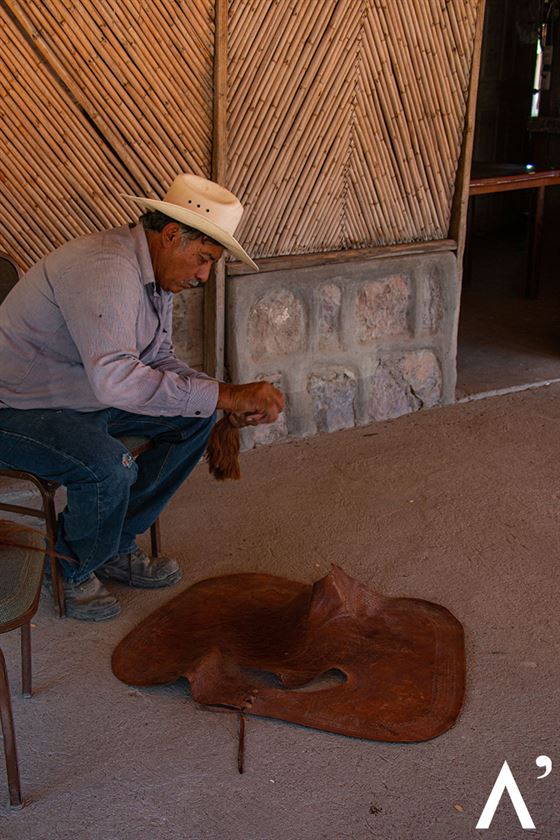 About stories of San Luis Gonzaga, she shared with us: “My grandmother was a cook in a country house, where local cowboys went to go hunting. The guaycuras lived in this region. Before, you could find gold or silver nuggets where you least imagined”.

After her husband, Mr. Jose Manuel Espinoza, joined the conversation, he told us: “Some of the founding families were Romero, Espinoza, Talamantes, Marquez, Higuera, Arreola, they were the bosses, De la Toba were the first to arrive. The trades were livestock raising, saddlery, canning and pickling, and winemaking. Our oasis attracted people, many stopped to drink water. The Company Store (Tienda de Raya) is a French-style construction, very similar to the buildings in El Triunfo”. Later, he surprised us by showing us various trades of the Southern California rancher. He moved us with the pride with which he shared with us how to make a halter from horse bristle that can also be made from leather, according to what he told us. 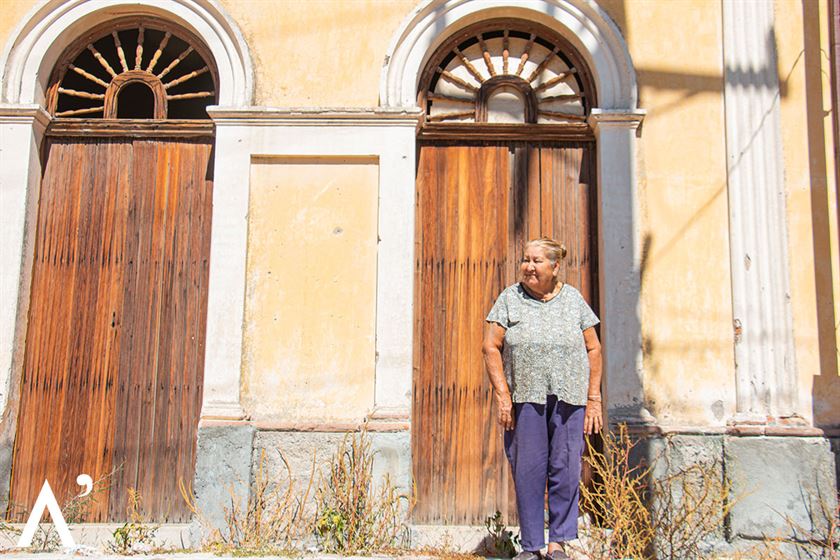 Before leaving, Ramona Romero enthusiastically shared her joy of living in a quiet community. She gladly posed for our camera in the former Raya Shop.

The isolation has allowed the preservation of the life of the Southern Californian rancher, almost intact.

The religious order Society of Jesus was founded by Ignacio de Loyola, a Castilian soldier and poet, who became the first military man of the order. The initial purpose of the Jesuits was to evangelize the Turks of Palestine. When approved by the Pope Paulo III in 1540 this order became an important instrument in the fight of the Roman Catholic Church against Protestantism and the beginning of what we know as the Counter-Reformation.

With its arrival to the Californias in the seventeenth century, this land witnessed great historical events and apostolic constructions, now preserved as part of the identity of the people of Baja California Sur.

In 1737 the 16th mission was founded, and it was christened with the name of San Luis Gonzaga Chiriyaqui. 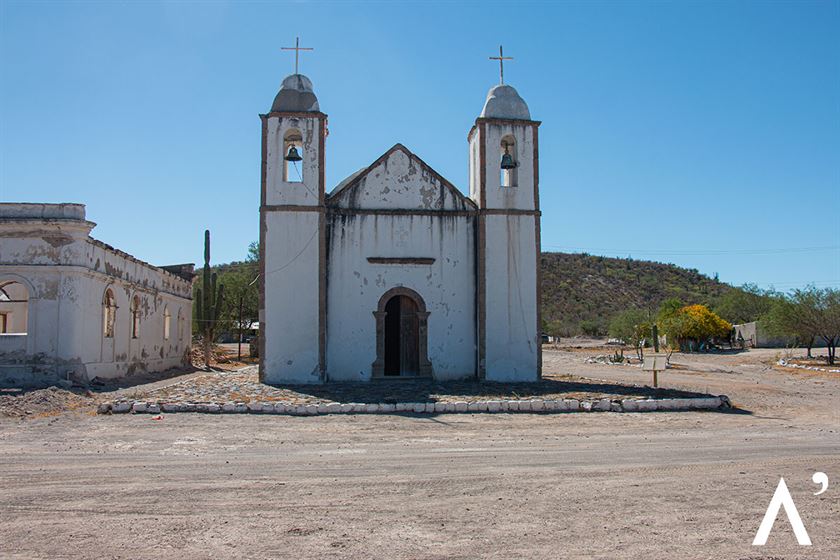 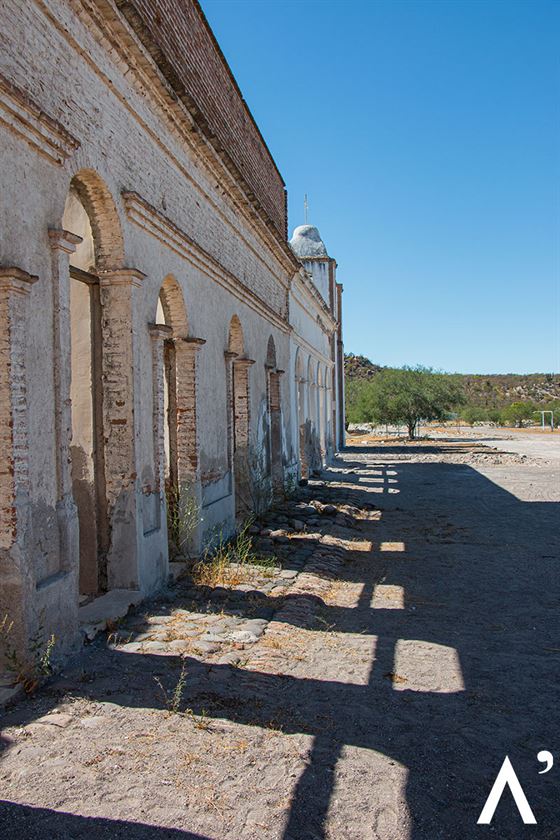 The church consists of a single nave shaped like an “I”. In front, its enormous door stands out, as well as two towers, in one of which is the original bell, dating back to the 18th century. Walking inside the temple, we can see, on the altar, the statue of San Luis Gonzaga with colorful flowers. June 21 is the celebration of the patron of the church, where the community holds christenings, first communions and confirmations.

It was the 16th century and Rome was attacked by the plague, the fields had been abandoned, it was a time of bad harvests and famine. The hospitals were full. The city was not prepared for this situation, there was too much poverty and lack of hygiene.

There was a Jesuit who collaborated in the care of the sick named Luis Gonzaga: an Italian monk. Being in contact with patients, Luis contracts the disease that kept him in slow agony for three months. He passed away in 1521, at only 23 years old. He was beatified, canonized, and declared Patron Saint of the Youth.

He was very devout since childhood, at the age of 14 he was named page of Don Diego, prince of Asturias; it was a great honor. But he rejected a life of luxury, standing firm in the decision to follow a religious education. He did his novitiate at San Andrés del Quirinal in 1585 and two years later he took his perpetual vows of poverty, chastity, and obedience.