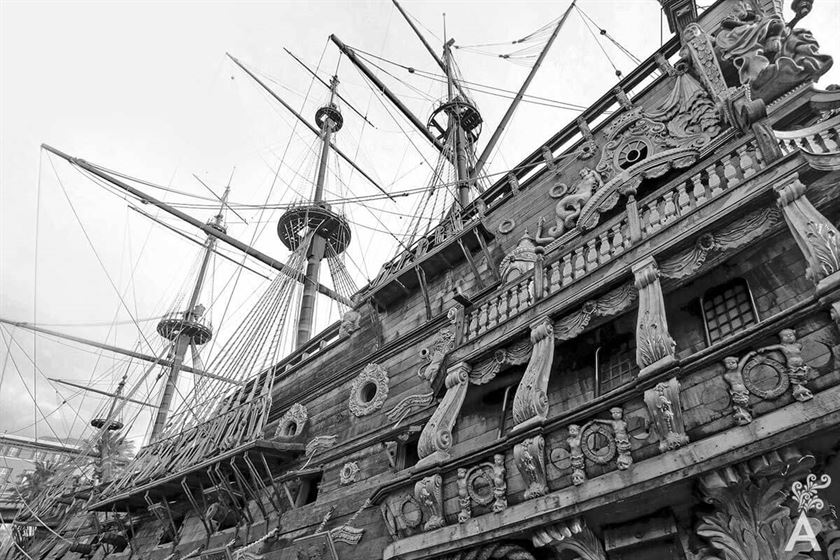 From rustic rafts and galleons to majestic sport fishing vessels.

The symbiosis of history and imagination with the past and future make this scented soil one of the most wonderful places in the world. The nautical history of the southcalifornians seas perhaps began with the Guaycuras, Pericues and Cochimies Indians who were nomads.

On handmade rafts made from three to seven tree trunks tightly bound with pita twine, they traveled the sea everyday in search of food and pearls used to adorn their especially beautiful women. Fortun Jimenez and the crew of La Concepcion discovered the existence of the pearls in 1534 when they arrived in La Paz Bay to the amazement of the natives.

The following year was a milestone for the Californians who owned this scented soil. On May 3rd, 1535, three ships, Santa Agueda, Santo Tomas and San Lazaro, arrived in La Paz. They were led by the conqueror Hernan Cortes who, after coming to shore in a six-person row boat on a sunny afternoon, stepped on Californian land and took possession of what was called at the time, Santa Cruz.

In 1565, the shipping line from Acapulco to Manila was established under the leadership of friar Augustine Andres de Urdaneta, who mapped an appropriate route for the galleons from the Philippines. The first galleon was called San Pablo. Since this date thousands of ships attracted by pearls and wealth to conquer this scented soil.

Dutch pirates named or known as “pichilingues” had made their base in the Bay with that name in La Paz. English privateers, Francis Drake and Thomas Covendish, patiently stalked, boarded, looted and burned the most powerful galleon in the fleet of the Spanish armada off the coast of Cabo San Lucas. El Santa Ana was on its way to Acapulco loaded with riches from the Philippines.

From this, and other historical accounts, came legends about treasures, and pirates’s ghosts that plundered the seas and hid treasures in walls and the white sands of the bay.

More than a century and a half passed before the spiritual conquest formally began. During that time, three ships are noteworthy: La Capitana, La Almiranta and San Francisco Javier. The latter was led by Admiral Atondo y Antillon who transported father Eusebio Kino, one of the pioneers of the Californian colonization, along with two other religious figures and 24 sailors.

In October 1697, the spiritual leader, Father Juan Maria de Salvatierra, came to Loreto on the ship Santa Elvira. The Santa Elvira sailed our seas many years, and even though his military helmet and his sails have disappeared, the spirit of the venerable missionary’s ship remains in the memory of the inhabitants of the peninsula.
[/two_first][two_second]
[/two_second]

In 1709, English pirates, in a fleet commanded by Rogers Wooders, stormed the Manila galleons at Cabo San Lucas and seized the Spanish ship Nuestra Señora de La Encarnacion. The pirates stalked another galleon, El Begonia, but the 900-ton ship with powerful guns put the pirates to flight.

Up to the time the Jesuits were expelled in 1768, four boats were built on the peninsula. It was an admirable feat for the missionaries since, as well as building the boats, they brought the gospel, culture, opened the lanes of communication and constructed the sublime El Camino Real.

After the expulsion of the missionaries on the ship La Concepcion, the government of California was established, political systems developed, and commercial shipping lanes opened to the world. The Dutch ships returned, not with buccaneers, but armed for diving for the mother of pearls.

In addition, Russians loaded their ships with salt for their settlements in Alaska. Scandinavian sailboats arrived to hunt for whales. Fur traders came for walrus and sea lions. European ships carried copper from El Boleo mine in Santa Rosalia. Large ships from Europe arrived off the coast of Bahia Magdalena and the municipality of Comondu to harvest thousands of tons of the orchil parasitic plant used to make the purple dye for royal robes and ecclesiastical garments.

It is noteworthy that in 1769, an expedition of scientists from Paris reached Sudcalifornia in a galleon from Manila. They came to observe the passage of Venus across the face of the sun. The event occurred on June 3rd. One of the scientists who participated was the Abbe Jean Chappe. He remained on the mainland until his death and was buried in San Jose del Cabo.

In another attempt by England to seize Baja California, the ships El Auracano and El Independencia attacked San Jose del Cabo and Loreto in 1822. As a result, the inhabitants where killed and the settlements looted by ferocious English pirates, bitter enemies of the Spaniards. In 1830, the port of La Paz was opened. The maritime activities and available anchorage signaled the beginning of the commercial and economic recovery of the territory.

This was the era of the merchant marine. They strutted their fiscal progress along the piers from the second decade of the eighteenth century until 1964 when the first La Paz ferry arrived in the capital city. With this, the cultural transformation began. People arrived from everywhere with their traditions, customs and knowledge. A boom in legitimate commerce replaced illegal trading.

The La Paz ferry was followed by the Diaz Ordaz, Benito Juarez, Puerto Vallarta, Mazatlan, Coromuel, Loreto, Azteca and Guaycura, ships that were part of the federation. In the 1980’s, there was a ferry route between Cabo San Lucas and Puerto Vallarta. However, in the interest of serving the development of tourism, the service was ended.

In 1997, the Port Authority of Baja California Sur SA de CV was established. The Federal Government contracted with private enterprises to manage and operate the ports in the State. The results were visible. Transport services opened between the Port of Pichilingue and the ports of Lazaro Cardenas and Manzanillo.

In the early 1960s, intrepid adventurers came to Los Cabos in small boats to enjoy the scenery and the beauty of the area. This led to the first services for visitors. One can say that the first hotel was not on land but at sea and was a motorized sailboat named the Goodwill.

Men, women and their families who visited this scented soil in those years undoubtedly have photographs and warm memories of the boats and people that began the tourism business in Los Cabos. In Palmilla, the boats were Buena Suerte, Chiriquí, Lilita, Costa Azul, Ramona. In Chileno, there were vessels from La Marmota I to La Marmota VIII. At the hotel Finesterra, La Tortuga I to La Tortuga VIII. Solmar also contributed with a fishing fleet.

Today, Los Cabos has the largest fishing fleet on the Pacific. However, these commercial vessels are overshadowed by the large number of boats dedicated to recreation and sport fishing. One can see majestic yachts and cruise ships that sail from the coast of the United States and visit the main Pacific Ocean ports on the Baja California peninsula. The visitors enter the Sea of Cortez to continue a great odyssey searching for the finest marine specimens such as sailfish and marlin, or just to relax for a few days or weeks in the paradise of the scented soil.

Previous articleThe History of the Camino Real
Next articleCalifornian Literature